[Jeju Update]Emergency on Dec. 27/ One day before the big struggle on Dec. 27 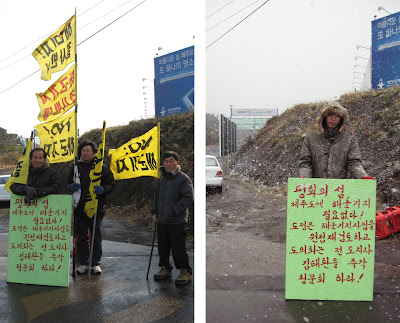 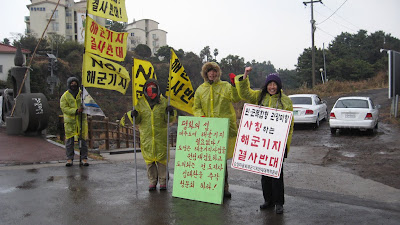 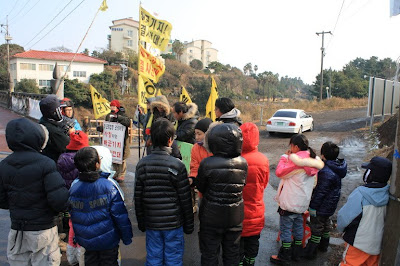 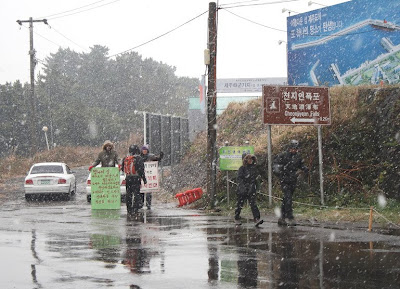 Emergency’ of the Civil Social organizations, due to the Navy’s move of the construction resumption on Dec. 27

The civil social organizations will have the press interview to demand the stop of construction on Dec. 27.

‘The Pan-Island Committee for Prevention of the Military Base and for Realization of Island of Peace’, ‘Special Committee for the Island of Peace, Catholic Jeju District’, ‘Christian’s Council for Peace,’ in the Jeju Island will have the press interview nearby the naval base construction site, Gangjeong village at 9am, Dec. 27, 2010.

The organizations in ‘tent sit-in’ said, “ The navy is starting its active step for the naval construction following the result of the lawsuit on the annulment on the cancellation of the absolute preservation area’ on last Dec. 15,” and “ It is known that the navy is planning the large size entry of the materials to construct its site office on Dec. 27,’ through its press release on Dec. 26.
‘However those civil organizations “ emphasized that “Currently, the appeal against the Dec. 15 court decision is being moored,” and “While the conflicts among the Gangjeong villagers are being intensified due to the naval base issue and the government’s support policy reflected of the villagers’ opinion is uncertain, the navy’s move to resume the construction should be obviously stopped.”
(Summary translation of the Headline Jeju)

Posted by NO Base Stories of Korea at 7:43 AM