Photo Fwd: The new-elected chairpersons of the pan-Korean university student body announce ‘ No war-statement regarding the state of affairs 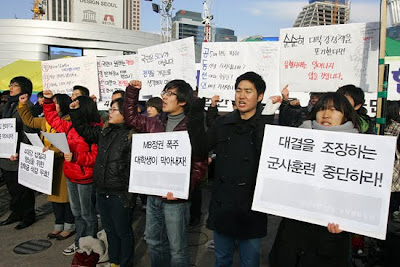 One sign reads, " Stop the military drill that instigates confrontation!" 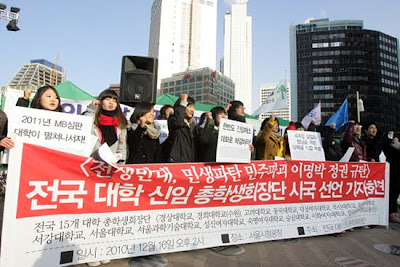 In their statement on the state of affairs, the students criticized that, “The [Lee Myung-Bak] government and the majority party are crying retaliation to the danger of people’ lives. The scene that they internationally say such and such of war, while domestically irrefragably oppress people’s voice of opposing their government is the very picture of dictatorship and fascism that we have often seen in history.

They said “It would be the youth in 20s who would be first pushed to battle field if war breaks out,” and “The voice of anxiety and concern from our seniors, siblings and juniors who have been enlisted to the military shows that war is the affair not only happening on the other side of Earth but being imminent to us.”

They emphasized that, “We, resolutely opposing any move including military drill that heightens tension, which instigates war, will make clear that we can bring back peace only by talk. Because the Lee Myung Bak government has chosen to cross the Rubicon, the attitude of we, university students cannot but be different. The Korean society will be filled with aspiration of change, we, university students will be at the forefront to create such aspiration.”
Posted by NO Base Stories of Korea at 2:59 AM