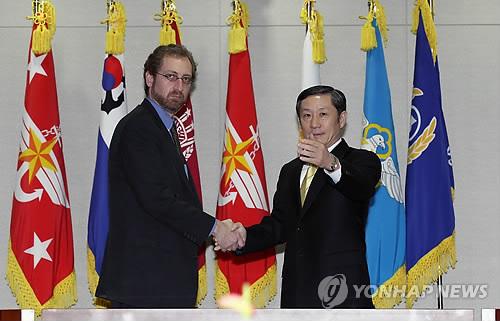 SEOUL, Dec. 13 (Yonhap) -- South Korea and the United States have formed a joint committee to make decisions about the alliance's nuclear policy, stepping up their commitment to deterring threats from North Korea's nuclear programs and other weapons of mass destruction, officials here said Monday.

The Extended Deterrence Policy Committee was officially set up at a meeting of the Security Policy Initiative (SPI) forum in Seoul earlier in the day between senior defense officials from the two nations, the South's defense ministry said in a statement.

"The Extended Deterrence Policy Committee was launched as the two sides signed terms of reference to systemize it," said a senior ministry official.

"Institutionalizing the committee is meaningful for the alliance because it paves the way for the two governments to draw up countermeasures against North Korea's nuclear threats and weapons of mass destruction," the official said on the condition of anonymity.

South Korea and the U.S. agreed to hold the first meeting of the committee in February or March of next year in Washington, headed by Deputy Defense Minister Chang Kwang-il and his U.S. counterpart, Michael Schiffer, deputy assistant secretary of defense for Asia and Pacific security affairs.

South Korea and the U.S. agreed to form the committee at their annual defense ministers' meeting in October.

Extended deterrence means the U.S. can provide tactical and strategic nuclear weapons, conventional strike and missile defense capabilities to defend South Korea in case of an attack from North Korea. It is the first time for the U.S. to create such a committee with a non-NATO ally.

During the SPI talks, the allies also reaffirmed their commitment to respond firmly should North Korea strike the South again, after its Nov. 23 artillery on the South's border island of Yeonpyeong.

The SPI talks, the 27th of their kind, come as tensions run high on the Korean Peninsula following the North's island attack that killed four people.

The bombardment also injured 18 people and destroyed dozens of homes, marking the first attack by the North on a civilian area on the South's soil since the end of the 1950-53 Korean War.