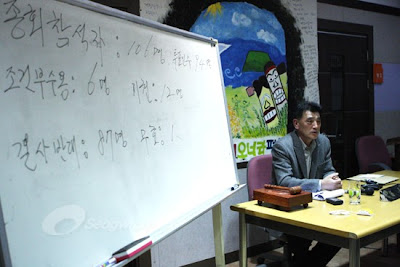 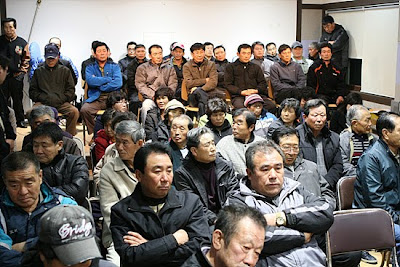 Activists from the Pan-Island Committee including those from the women oraganization; and an Olle tourist who wanted to take a photo expressing his opposition against the naval base. (Click the image for larger view) 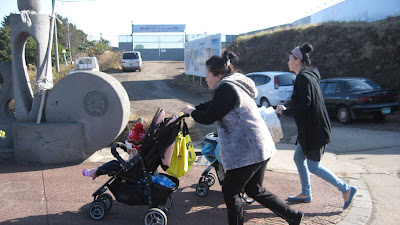 Two women with baby carriages pass by the makeshift fence of the planned naval base, set up after the police & navy raid on Jan. 18, this year. How disastrous the future of these women and babies will be if the naval base is built up in the Island of Peace, Jeju Island?

Yesterday, on Dec. 22, female members of the Jeju Consultation Office for the Victimized Women by Sex trade, Jeju Women Human Rights Solidarity, and Jeju. 4. 3 related organizations rotated the tent sit-ins in front of the planned naval base area. The warm weather became cold in the afternoon but we could well finish the day’s sit-ins by the sun-set thanks to the Olle tourists’ encouragement. Mr. Hong Ki-Ryong, Chairman of the Pan-Island Committee and some peace activists have gladly visited and stood with us with signs. An Olle tourist have taken photo with us saying he also opposes the naval base in the Jeju Island (Refer to the photos)

Otherwise, it was the time to think of the issues on women, thanks to the members of the women organizations even though it was for a short time. A woman member from the Consultation Office for the Victimized Women for the Sex Trade talked about the Mindlle Pilgrim activities that cherish the memories of the victimized women by sex trade. It is the event, commemorating the special law on the prevention of the sex trade, which has begun to be carried out since Sept. 23, 2004. There were five victims in the Jeju Island this year but the bereaved families of only two of them came-sadly reminding the lives of the easily forgotten women.

Ha Soon-Nam, a senior in the Jeju Women Human Rights, who has researched, collected and published a poetry book about the wild grasses in the Jeju Island, talked about the Moselpo air base that has been used by the Japanese imperial army then by the U.S. military until the latter withdrew in the early 90s. She told that the vicinity areas of the base was lit by the artificial lights that came from the military camp side towns nearby every night. It would be women who would be one of the most victimized if the naval base comes in the Jeju Island. The meaning of the women’s voice and resistance against the anti-women nationalism, militarism culture must be very big in the struggle against the naval base in the Jeju Island.

Otherwise, the villagers made their final decision on the naval base at the villagers’ general meeting held at 7pm on the day. It was the resumption of the Dec. 17 meeting that made no conclusion. While 106 villagers joined it, 87 votes for struggle to the end, 6 votes for conditional acceptance of the naval base, 12 votes for abstention and 1 vote for nullity. The ‘village’s response on the Dec. 15 Jeju local court decision of dismissal of the plaintiffs in the lawsuit on the confirmation on the cutoff and annulment of the cancellation disposal of the absolute preservation area’ was also discussed. Kang Dong Kyun, the mayor of the Gangjeong village said that he had made immediate complaint on Dec. 21 for the Dec. 15 court decision and would appeal the lawsuit to a higher court on coming Dec. 24.

Mayor Kang said, “While the issue of the naval base is important, I feel more painful to see that the villagers are becoming divided one another due to the naval base issue. The whole responsibility for that should be charged to the Jeju Island, navy and government, “ added that “ Even though we have expected that a breakthrough for talk would be made since the new Island government that has said it would find everyone’s win-win way launched, nothing has eventually changed."

He also said, “We would try to stage the opposition movement within the legal frame, restraint of extreme actions, as we have done peaceful and legal struggles by now. However, as there were lots of villagers’ opinions to strongly prevent the navy’s material entry planned on Dec. 27, we would discuss struggle method for the day afterward.”

Otherwise, there would be the Catholic’s peace mass against the naval base, lead by a bishop, Kang Woo-Il in the Joongduk coast. There will be also another Catholic peace mass in front of the Island Hall after the villagers’ application for appeal and press interview at 3pm, Dec. 24. Some people will visit the workers’ solidarity rally being held in front of the Island Hal, City of Jeju at 7pm, Dec. 23.