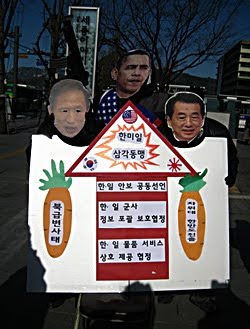 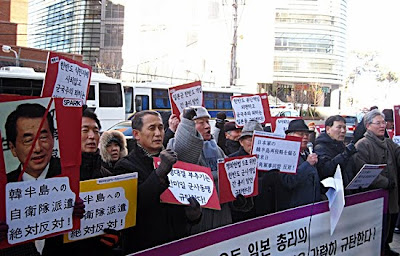 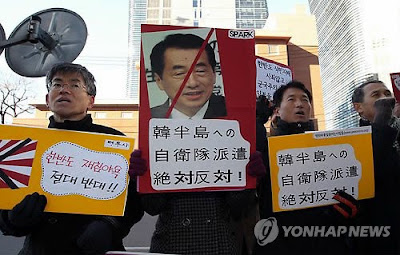 *Image & caption source: Yonhap
Civic activists denounce Japanese PM's remarks 'Dec. 14, SEOUL, South Korea -- A group of civic activists holds a rally in front of the Japanese embassy in Seoul on Dec. 14, denouncing Japanese Prime Minister Naoto Kan's recent remarks on a possible dispatch of Japanese troops to the Korean Peninsula in case of contingencies. (Yonhap)'
____________________________________________________________
Civic organizations such as the Solidarity for Peace And Reunification of Korea, the Korean Council for the Women Drafted for Military Sexual Slavery by Japan, and Institute for Collaborationist Activities had the press interview to denounce the remarks by Naoto Kan, Prime Minister, in front of the Japanese embassy, Joonghak-dong, Seoul, Korea, at 1: 30 pm on Dec. 14. 2010.
They also demanded the withdrawl of remarks by the Prime Minister Kan, saying, "his remark that the Japanese Self Defense Force would carry the operation along with the ROk-US combined forces in the regions of North Korea in case of emergency affairs in North Korea shows that Japan's militarism ambition is being developed even into the plan of military-power intervention in the state of emergencies in North Korea."
Before it, the civic organizations such as the SPARK, Solidarity Practice for NK-SK Joint Statement, and Association of the Family Movements for Democracy Practice, having the '135th Self-Reliance Unification Peace Action' rally' in front of the United States embassy, Gwanghwamoon, Seoul, opposed the ROK-US-Japan trilateral military alliance and Japanese Self-Defense Forces's Dispatchment.
Saying that, "the demand by Mike Mullen, Joint Cheifs of Staff, of JSDF's participation in the ROK-US joint drill and the remark by Naoto Kan, Prime Minister of Japan, of dispatching the JSDF in case are followed after long-time pressure and demand by the United States who pursues the Asian NATO, upon the chances in which confrontation consciousness against North Korea by the Cheonan ship incident and Yeonpyeong Island incident,' they claimed that "it is for the United States to maintain and strengthen her domination."
(*The above is the summary translation from the article by Cho Jung-Hoon, Tongil News, same link as the above, in this blog.)
____________________________________
* Related blogs 관련 블로그
Dec. 12, 2010
Text Fwd: S. Korea calls Kan's remarks on Japanese troop dispatch 'unrealistic'
남한은 일본 군대 파견에 대한 나오토 칸의 언급이 비현실적이라 말함