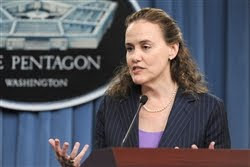 * Image & caption: same as the link
Under Secretary of Defense for Policy Michele Flournoy holds a press briefing at the Pentagon, Dec. 10, 2010, at the conclusion of a full day of bilateral defense consultative talks with defense officials of the People's Republic of China. The U.S. is seeking a more transparent defense relationship with China and Flournoy indicated that the talks were candid and open. DOD photo by R. D. Ward
* Text informed from Corazon Valdez Fabros through no AP bases on Dec. 11, 2010

Michele Flournoy, the undersecretary of defense for policy, said her talks with General Ma Xiaotian in the Pentagon really re-started the U.S.-China military-to-military relationship. Ma is the deputy chief of the Peoples’ Liberation Army’s General Staff. It was the 11th round of the U.S.-China Defense Consultative Talks.

“We discussed the relationship itself, an integral part of our positive, cooperative and comprehensive bilateral relationship with China,” the undersecretary said. “We also discussed how to develop a more durable framework to shift the military–to-military relationship to a more sustained and reliable and continuous footing.”

The two sides discussed maritime safety and regional issues including security concerns about Africa, North Korea, Afghanistan-Pakistan and Iran. Flournoy thanked the Chinese for their efforts in the United Nations on the Security Council sanctions against Iran and its nuclear ambitions.

Ma and Flournoy exchanged views on the U.S. nuclear posture review and ballistic missile defense report. They discussed the importance of China continuing to make progress in improving its openness and transparency in defense matters, Flournoy said.

The talks pave the way for Defense Secretary Robert M. Gates’ visit to China in January.

“These were positive discussions,” she said. “While I won’t say we agreed on every issue, where we did differ we had a very candid, frank and productive exchange. These talks form the basis for a more productive relationship between our two countries and our two militaries over time.”
Posted by NO Base Stories of Korea at 12:07 AM