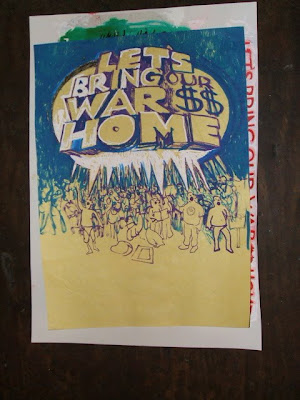 I am on the bus heading to Boston where I will transfer to a train for Washington DC. When I arrive in DC I'll grab a taxi and get to a local church just in time to attend the Veterans for Peace meeting to review plans for the anti-war action tomorrow at the White House.

There are five of us from Maine (that I am aware of) who will be joining this protest. Four of us are members of Maine Veterans for Peace. I have no clue how many people will attend this event which begins at 10:00 am with a rally in Lafayette Park just across the street from the White House and concludes with a civil disobedience action in front of "the people's" house.

Years ago I was arrested for sitting in front of the White House along with alot of other activists who at that time were opposing U.S. policy in Central America. I don't remember for sure if we spent the night in jail or not. I have no idea what is likely to happen to us this time around.

I am glad to be joining this event although I must acknowledge that I don't believe that Obama can be reached by moral, ethical or fiscal appeals in relation to his war on Afghanistan. I am essentially joining this action because I must. I am doing it because I feel that people right now have the responsibility to publicly stand in opposition to the empire's endless war machine. The public needs to know that someone cares and is taking action.

Obama and the Pentagon have already begun to signal that the 2011 withdrawal date from Afghanistan is being rubbed out and a 2014 date is being trotted out as the next target. But I don't have any faith in the 2014 date either. At the rate of $8 billion a month there is way too much money being made on the war to bring it to a halt anytime soon. It's a lucrative gravy train for many corporations.

I will be proud to join with the others tomorrow that are stepping forward to say enough of this insanity. I hope those of you at home will make a call and write a letter to the editor as a show of solidarity with those of us at the White House. This action will only be as effective as you help us make it.
Posted by NO Base Stories of Korea at 2:06 AM