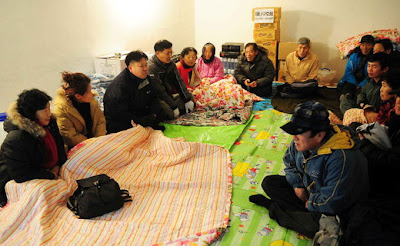 Photo caption = Residents of Yeonpyeong Island gathered at a shelter in the morning on Monday while the evacuation order was issued ahead of the South Korean troops' live-fire exercise. Facial expressions of most of the residents look rigid on account of cold weather and nervousness. (Dec 20, 2010) Pool photo

Kyunghyang Newspaper
South and North Korea, Cool Down and Seek Alternatives to Ease Tension!
2010-12-21
Although South Korea's maritime fire drills were staged this time as professed, North Korea did not respond for once, and so, the worst situation did not materialize as was feared. It was fortunate. However, it is too early to get the feeling of relief.

As before, the South and North Korea are still under extreme state of tension, and a situation continues to exist that could thrust the whole Korean people into the depths of tragedy at any moment in an instant. South and North Korea must restrain themselves by having a cooling period, and the two sides must make active efforts to discover ideas to relieve tension.

The South Korean government holds the position that it carried out what it should do, regarding the fire drills as 'a sovereignty-related event'. The government expresses a sense of relief that North Korea did not retaliate as it professed, and it simultaneously is alerted against additional provocations from the North.

There may be lots of reasons that the North did not respond. What is worrisome is that if the Government interprets North's non-response as victory earned from South's hard-lime policy and proceeds with the hard-line basis, then South and North Korea could meet with an unpredictable and worst situation.

Now is not the time to get intoxicated with a sense of victory. Now is the time for serious contemplation as to what both sides must do to alleviate tension substantially on the Peninsula.

What is required of the South's government is a cool self-reflection. The letters "W, A, R" fly over skies of the Peninsula because of the spiking tension here. This is what the South paid as cost.
It does not end at this point. South Korea has incurred a great burden in relationships with China and Russia surrounding the resumption of the drills, and furthermore, we became indebted to the United States and Japan, which took our sides.
And it is very probable that a cold-war style confrontational aspect will deepen between South Korea-U.S.-Japan and North Korea-China-Russia surrounding this happening on the Peninsula. And, without extra special efforts, the betterment of South and North Korea relationships would not materialize. South Koreans lost too much even though the Lee government claims that a victory was won in the fight of guts against North Korea.

Currently, the Korean Peninsula is in a state of unpredictable situation where we cannot see even one inch ahead. If North Korea carries out physical response as they professed, South Korea will very probably execute its self-defensive rights as it also professed.

South and North Korea both are trapped by their own language. What the South and North should bear in mind at this point is that any additional action by either side leads both of them to failure. In this vein, both sides must seek for a turning point.

Now what follow-up response the South will take has become important. If the South maintains a hardline policy as currently, one cannot rule out the possibility of recurrence of armed clashes any time and any place.

On the contrary, if the South shifts to a dialogue policy, then the present confrontation can be transformed into a turning point for the better. The future of the Korean Peninsula depends on the South's choices.

The problem here is time. If the South Korean government does not strive to shift its policy lines swiftly, then extreme situations may recur, where all the people may fall hostage anytime.

The South Korean government needs to take an initiative to create an atmosphere for dialogue with a forward-looking stance with a view to relieving tension and reviving peace basis. In this process, serious cooperation from the North is essential, of course.

Yonhap News
S. Korea lights up Christmas tree on border with N. Korea amid tension
2010/12/21
Posted by NO Base Stories of Korea at 6:55 AM