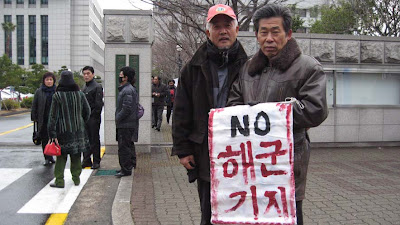 We cannot acknowledge the court judgment this time, which ignored common sense and consciousness. The court judgment this time, which judged only the matter of plaintiffs’ proper qualification rather than deciding based on content is a clear ‘avoidance decision’ and cannot be freed from its moral responsibility, as a result, for supporting only logic of military base construction, while acknowledging the Island Assembly’s disposal of bill in snatching way [last year].

In the [Dec. 15] lawsuit that has been sought for the cancellation of the annulment disposal on the absolute preservation area in the Gangjeong village, the court concluded dismissal of indictment for the reason of improper qualification of the plaintiffs.

The court saying through its court decision that the approval on the execution of plan by the Ministry of National Defense, last year and the disposal on the annulment of the absolute preservation area [by the Island assembly, last year] are separate ones, concluded that while the plaintiffs’ proper qualification in the [lawsuit on] former is acknowledged, it did not mean that the plaintiff’s qualification of the court judgment this time [on latter] cannot be seen as acknowledged as well. And it is attaching the decision reason, in fact, that the issue of the naval base construction is enough with a lawsuit related to the approval of the execution plan by the Minister of National Defense and the legal dispute [on the latter case] has no interest, [for the issue].

Are the Gangjeong villagers who have filed the [two] lawsuits for their demurrers are different [in the two lawsuits], because the approval disposal [on the execution plan] by the Ministry of National Defense and [cancellation] disposal of the absolute preservation area are separate administrative disposals? If the plaintiffs’ qualification on the matter of the absolute preservation area in the same area is not acknowledged while their qualification for an environmental impact assessment is acknowledged, what on earth is the standard of legal logic- the villagers as substance or only the logic by law? Further, what does it mean that the court says the matter of legality regarding the procedure of military base construction is enough only by the legal dispute related to the approval disposal by the Minister of National Defense?

As a result, we cannot but regard the court decision this time that it is, in fact, no more than a provision of legal logic that supports the logic of military base construction and we can never accept it, regarding common sense.

Also, the lawsuit on the annulment on the cancellation of the absolute preservation area this time has had a purpose to examine the procedural problem with which it was dealt, not just to seek the justification of the content on the cancellation disposal of the absolute preservation area. However the court buried all [the problems] such as the matter of legality on the unreasonable disposal by the Island authorities that had enforced it excluding the truth examination on the snatching disposal by the Island Assembly and collection of villagers’ opinion, which had been the controversial points, under its court decision of ‘improper qualification of plaintiffs.’ In other words, it is nothing but that court avoided its decision.

In other words, it is like that the court supported only the logic of military base construction being processed under the cause of national business whatever the procedural justice has been, while it legally acknowledged the snatching disposal on the very agenda by the Island assembly last December, as a result.

Thinking that the court decision this time was not only very dishonest judgment, looking it in the mirror of common sense and consciousness, but also in fact, political decision that has backed it, prioritizing nation logic.

Further, we express our will that we would resolutely resist against the expected active construction steps of the military base, under the evil spell of court judgment this time.

The Pan-Island Committee for Prevention of Jeju Military Base and for Realization of Island of Peace
Posted by NO Base Stories of Korea at 12:34 AM