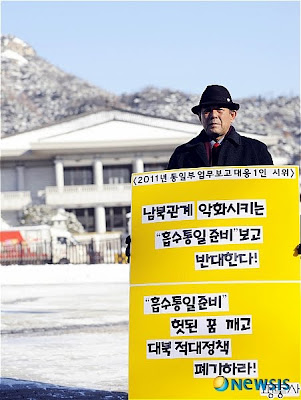 * Image source: Newsis, Dec. 29, 2010 (* informed at the Solidarity for Peace And Reunification of Korea)
We oppose the 2011 report by the Ministry of Unification on the preparation for an absorbing unification
Abolish the hostile policy against North Korea! 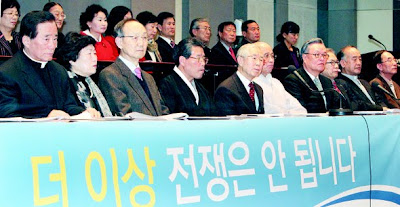 * Image source: same as the link
Elder representatives of the religious sector and civic society sit behind a banner that reads “There must not be any more war on the peninsula” during a press conference at the Korea Press Foundation, Dec. 29. (Photo by Shin So-young)

A total of 137 elders and leaders from the country’s six main religious groups - Catholicism, Protestantism, Buddhism, Won-Buddhism, Cheondoism, and Sungkyunkwan - along with civil society issued an appeal Wednesday urging efforts between North Korea and South Korea to “prevent war and establish peace on the Korean Peninsula.”

“There must not be any more war on the peninsula,” the appeal stated.

At a press conference Wednesday afternoon at the Korea Press Foundation in Seoul’s Jung District, the leaders called for a halt to all aggressive military actions and provocative statements and behavior between North Korea and South Korea and the formulation of basic measures to establish a firm national security posture and peace on the Korean Peninsula.

Hankyoreh
Unification Ministry adopts policy of aggressive pressure against N.Korea
:The Lee administration’s promotion of ‘change’ in N.Korea as a prerequisite for dialogue has been criticized for its ineffectiveness in improving relations to date
Posted on : Dec.30,2010 16:02 KST
Posted by NO Base Stories of Korea at 8:11 PM