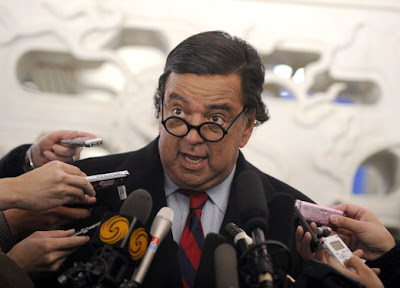 Photo caption =
Bill Richardson, Governor of New Mexico, answers to questions from reporters during a press conference held at Beijing Airport after his visit to Pyongyang. Richardson said that North Korea's not having responded to South Korea's recent military drill is a very important progress in that the North has expressed its will to have a dialogue. North Korea conveyed its willingness to Richardson that it will accept inspectors of IAEA. However, this acceptance of inspectors has a different implication from one of the conditions that South Korea, the United States, and Japan put forward as a pre-condition for resumption of 6 party talks. That is, North Korea intends to show that they are not enriching uranium to make nuclear weapons by receiving inspectors; on the contrary, South Korea, US, Japan demand that North Korea accept inspectors to make sure that North Korea promises to stop all nuclear activities including uranium enrichment and to make sure that this promise is kept.
Photo by AP-Yonhap News, Beijing

It was learned that North Korea made two suggestions to Governor of New Mexico Bill Richardson who visited the country. Those suggestions were that the North can accept International Atomic Energy Agency inspectors again and ship 12,000 unused nuclear fuel rods overseas.

Those can be construed to be answers from North Korea to demands from South Korea and the United States that the North show the will to denuclearize and put cessation of nuclear development into action in order to resume 6 party talks.

North Korea's response like this is positive in that it wants to show off its denuclearization intention. It is clearly an advanced attitude, given that the North held the position that 6 party talks should be resumed without any precondition.

Already, the North's plutonium nuclear facility has gotten old, and it has entered into the dismantlement processes according to existing nuclear disablement agreement. In this state, re-discussing shipments of unspent nuclear fuel rods loses half of its significance, which was once broken off during negotiations.

In this way, North Korea's suggestions have a double face. These could be gestures intended to dilute the international atmosphere and trends that criticize and apply sanctions on North Korea; or these could also be a change of attitude to re-discuss North Korea's nuclear issue.

READ MORE
Posted by NO Base Stories of Korea at 10:02 AM