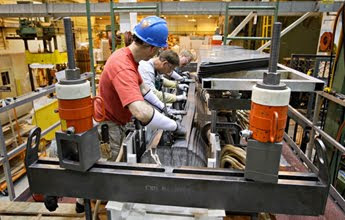 Washington, D.C. – Edwin D. Hill, International President of the International Brotherhood of Electrical Workers, issued the following statement on the proposed U.S.-Korea Free Trade Agreement:
For more than two decades, the American people have been told free trade was good for both workers and consumers. In reality, free trade policies, negotiated by both Democratic and Republican lawmakers, have killed good jobs here at home by encouraging offshoring by multinational corporations, creating a global race to the bottom that have gutted labor rights and environmental protections.

The proposed U.S.-Korea Free Trade Agreement will only perpetuate this cycle, encouraging further job loss and degradation of working standards both here and in South Korea.

The Economic Policy Institute estimates that the agreement will result in the loss of 159,000 American jobs in the first seven years of its implementation and add $16.7 billion to our trade deficit with South Korea.

While the Obama administration made efforts to improve worker protections and address concerns about jobs in the auto sector, the agreement – proposed by President Bush in 2007 – still falls far short of what is needed to make sure American workers and businesses get a fair deal.

Under the pact, Korean-built automobiles could contain up to 65 percent foreign content and still qualify for lower tariffs in the U.S. This leaves open the possibility that so-called Korean-built cars sold in the U.S. could contain a large majority of content
from low-wage countries such as China, Vietnam, or the Kaesong Industrial Complex – a free trade zone in the totalitarian, hostile state of North Korea – making a mockery of the agreement’s commitment to labor protections.

This FTA also includes an investor rights provision that could end up exposing domestic labor laws and financial regulation to foreign tribunals. A similar provision in NAFTA has already cost the American taxpayer $400 million compensation to foreign corporations, and millions more in legal fees.

In the midst of the worst economic recession since the Great Depression, working families cannot afford another free trade agreement that will outsource good-paying jobs, increase our trade deficit and further decimate the U.S.’s manufacturing sector. We oppose the passage of the U.S.-Korea Trade Agreement.
Read More
Posted by NO Base Stories of Korea at 6:48 AM