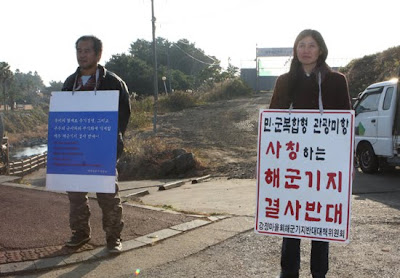 
Today, around 8: 30am, six stone powder dump truck, a water-purifier tank cargo truck, a light truck, a cement-mix car, and a water car came to the planned naval base area.. The purpose of the navy was the installation of the water-purifier tank in the planned naval base area of the Gangjeong village. Even though we intended to prevent the entry of those cars, since about 100 cement-mix cars uploaded with panel materials would come again in large size on Dec. 27, after the village meeting on Dec. 22, our opinions were collected to save our power for the D-Day. The corporation that was in charge of the construction of the water-purifier tank was the Daerim industry, the company that has been the cause of the Yongsan tragedy with Samsung.

There were about seven activists from the Pan-Island committee against the naval base, about seven villagers despite their busiest harvesting season in a year, and some peace activists in the planned naval base area of the Gangjeong stream. Despite little choice today considering the expected continuous struggles, the villagers’ council and the Pan-Island committee would resist against construction with all their power on Dec. 27, 2010.

Currently about 10 trucks are expected to come tomorrow at the similar time and the measure on that is still uncertain. However, it is expected that various struggles would be considered after the villagers’ general meeting on Dec. 22 that is the continuation of Dec. 17 meeting and many villagers and activists would gather power for Dec. 27.

Otherwise, Catholic peace missal against the planned naval base was held in the Joonduk coast connected from the Gangjeong stream, another absolute preservation area for an hour from 12pm.
Posted by NO Base Stories of Korea at 2:31 AM