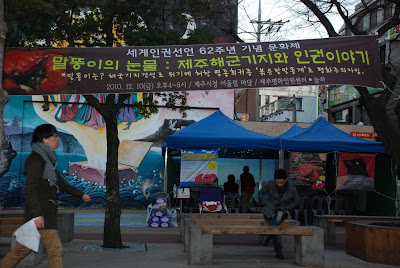 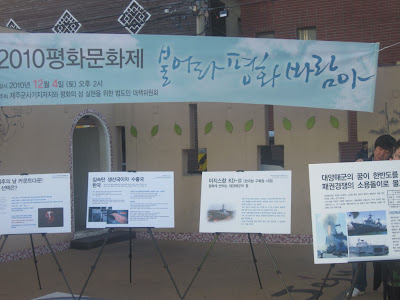 By the Yeonpyeongdo artillery exchange incident that has occurred last November, precious lives of not only soldiers but also civilians were sacrificed. We expressing our deep condolence to the victimized people by that incident, desperately hope that such things should not be repeated again.

The crisis of the Korean peninsula faced by the Yeonpyeong Island artillery fire incident, make us think about ‘peace’ again.

Many people are heightening their voice saying that we should prepare with more powerful weapons and we need more drastic countermeasures.

However, the Yeonpyeong Island artillery fire this time clearly shows that stronger weapons and more drastic countermeasures cannot but only be returned with more conspicuous threat of peace of other kinds.

It has been more than 20 years that the level of our defense cost passed over the national budget of North Korea and the expense of national defense cost comes around the 10th in the world. Despite that, if the issue of the Korean peninsula is dragged to the logic of military power build-up, it cannot but be said that the Korean peninsula pretenses itself as an explosive warehouse amidst the North East Asia where the cold war order is becoming deepen, to make matters worse.

Therefore, the Lee Myung-Bak government should face to its sincere and cool self-examination on what direction the peace management in the Korean peninsula should be done rather than saying such and such of strong chastisement, along with its change in its hard-line policies against North Korea, taking lesson of incident this time.

Currently, a construction of a large-size military base outfited with high-tech weapon system is being driven. It is the Jeju naval base construction. That will be considered as the representing example of military build up in South Korea in the future. Furthermore in the sense that the naval base in the Jeju Island would be, in fact, the base targeting China, it would only contribute to strengthen the new cold war order in the Northeast Asia where the three countries of ROK-US-Japan and the other three countries of NK-Russia-China are contesting. Especially, concerns are being raised that the military base in the Jeju would be not only a big obstacle for the vision of the jeju Island that dreams to step toward the Island of Peace in the future but also a thing that would clash with the national thesis of establishing the Northeast Asia peace community.

The Korean peninsula crisis by the Yeonpyeong Island artilery fire incident casts us with the question of whether continuos military power build up and military-security-centered nation security logic would be some helpful for the peace in the Korean peninsula. For that reason, the matter of the naval base construction in the Jeju Island should be totally reconsidered in such extended context.

The Jeju is creating its peaceful tradition taking the memory of sacrifice by national violence called April 3 [1948 massacre & uprising], sublimed with reconciliation and co-living. Based on such spirit, we would resolutely deny any demand of military base and declare that we would practice for the Island of Peace, Jeju, with all the peace-loving Island people, toward the day when the Island of Peace, Jeju is accomplished.
Posted by NO Base Stories of Korea at 1:10 AM