(* The blog, based on the Peace Philosophy Center, summarizes the recent Okinawa struggle) 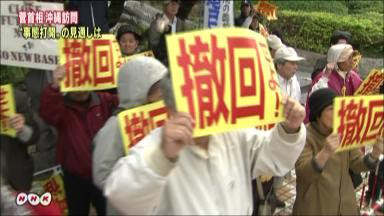 Okinawans loudly affirmed their democratic choice against another U.S. military base on their small island during Japanese Prime Minister Kan's visit, pounding on empty cans, holding signs: "No, You Kant!" and "No New Base!"

This video report from the Okinawa Times demonstrates the power and resilence energizing Okinawan expression of their democratic choice. Okinawans have repeatedly said "No" to Tokyo and Washington which want to build a new mega-base in Henoko, an environmentally sensitive and biodiverse area (home of the critically endangered Okinawan dugong) in north-central Okinawa.

More from Satoko Norimatsu (who is in Okinawa now for a forum, "Where is Okinawa Going?" being held at the University of Okinawa) at the Peace Philosophy Centre website.

Succinct background on this situation at the website of U.S.-based Network for Okinawa, a coalition of U.S. environmental, faith-based, peace groups, think tanks, and scholars that support Okinawan democratic choice and the protection of endangered biodiversity.
Posted by NO Base Stories of Korea at 1:24 AM