Text Fwd:[Translation] [JSPSGEP] Statement on the court decision on the annulment of the absolute preservation area in the Gangjeong village [Dec. 15] 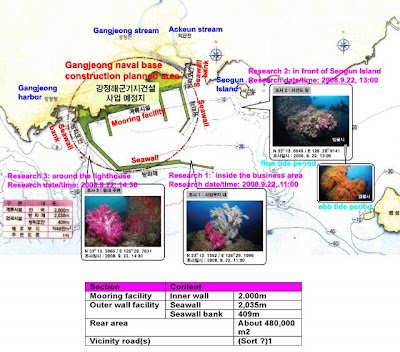 
No one can speak on the destruction of environment?
We are furious at the close-minded decision of the court!!

The unreasonable and unilateral drive process of the naval base by Kim Tae-Hwan Island government has reached its highest point in its cancellation of absolute preservation area. The Island assembly partly joined it by its own passing bill on it in the snatched way. Because of that, the last systematic tool on which the Gangjeong villagers could depend themselves was administrative lawsuit. However, the court ignored the Gangjeong villagers’ desperate hope.

Today, the court pointed out that the Gangjeong villagers who had filed the lawsuit were not properly qualified as the plaintiff, without making judgment on the cancellation process of the absolute preservation area. Its reason was that the Gangjeong villagers had not gotten direct affect by the cancellation of the absolute preservation area.

In Gangjeong, the sea of about 80,000 pyeong (* about more than 250,000square meters) would be reclaimed for setting up naval base. The reclaimed area is only short distance from the biosphere preservation areas; there are the soft coral habitats that are rare not to mention in our country but in the international; and there inhibit rare animals such as the red-feet crabs. It is disaster that the naval base enters in such area. Despite that, the court is saying that it is not directly related to the Gangjeong villagers. If then, how the environmental destruction by the oppression of state power can be prevented on earth? According to the logic of the court sentence, nobody can raise the lawsuit regarding environmental destruction. According to its logic, it means the Island people can never respond in the future even though an Island governor cancels all the absolute preservation areas of the Jeju Island with his/her omnipotent authorities while all the coasts of the Jeju Island have been designated as the absolute preservation areas.

Explaining the reason of its own sentence, the court said the matter is not that to be settled by law but by the talks between the Jeju Island and Island people. Such efforts have been repeatedly frustrated by the unilateral and oppressive drive by the Island government and navy. While the judicature decision was the last choice the Island people have chosen, facing the tyranny of state power, the judicature has avoided the Island people’s desperate wishes as if it was not its own business.

The judicature should not abandon its role to protect the citizens’ rights from the tyranny of state power. It should not forget that it is one of the reasons of its existence. Demanding the sincere self-examination by the judicature on the issue, we strongly urge it would not repeat its improper court decision