Text Fwd: How Can This Be "Politics"? 어떻게 이것이 정치일 수 있는가? 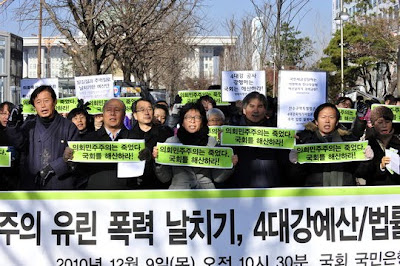 President Lee Myung-bak visited Indonesia yesterday and said that "the Republic of Korea will pursue to become a mature global country that contributes to peace and prosperity while respecting human rights and liberal democracy. It is a shameful speech even considering his remarks were made outside of South Korea that President Lee mentioned respect of human rights, who made Korean Human Rights Commission insubstantial and even forged it into a 'North Korea Human Rights Commission'.

It does not befit the president that Lee's government mentions world peace even after he failed in preventing and taking post factum measures regarding North Korea's provocations on Yeonpyeong Island, and receiving a brand of incapacity in national security. Above all things, it does not befit a president that Lee mentions "respect of liberal democracy" even after he gave directives that the budget bill be passed before his departure to Indonesia and as a result induced an utter bloody disorder in the National Assembly.