Text fwd: N. Korea may launch its “satellite” on April 4 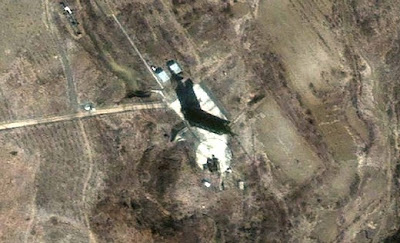 * Image source/ caption*
Same as the article below

The procedure of adding liquid fuel will be completed by March 29; Experts say “We can distinguish whether it is a missile or satellite only after it has entered orbit”

North Korea‘s long-range rocket was spotted Tuesday afternoon on the launch pad in Musudan-ri, Hwadae-kun, North Hamgyeong Province. Following North Korea’s previous announcement about launching a “satellite,” this positioning appears to indicate that they have now moved into action.

Analysts indicate that the remaining technical procedure for the launch to occur involves adding liquid fuel to the rocket booster attached to the launch pad. Because there is a significant risk of explosion if North Korea attempts to remove the fuel after it has been added to the booster, the fuel addition stage can effectively be seen as signalling a countdown to the launch.

The process of adding fuel takes three to four days. If North Korea begins the process now, the necessary procedures for the launch will be complete by Saturday or Sunday, more than five days ahead of the previously announced “satellite” launch date of between April 4 and 8.

For this reason, media outlets in the United States and Japan are reporting the possibility that the date of North Korea’s launch could now be moved up. A high-ranking official in the Japanese government disagrees with this and stated Thursday, “North Korea fundamentally sticks to what it has announced,” and predicts that it “may launch the missile on April 4, although it depends on the weather.”

An official at the Korea Institute for Defense Analyses agrees that North Korea will launch on its previously announced time-table, “if only to minimize post-launch friction with the international community and ensure the legitimacy of its claims that it is a satellite.”

The upper part of the rocket that is currently at the launch site is obscured by a cover, preventing South Korean and U.S. intelligence authorities from confirming whether it is a ballistic missile or a satellite. Analysts suggest this measure appears to be intended either to evade detection by U.S. spy satellites or to protect the rocket from rain and dust. “It is difficult to know before the launch or during the post-launch flight process whether the launch vehicle is carrying a satellite. We can only distinguish it after it has entered orbit,” said an official at the Korea Aerospace Research Institute.

Former South Korean Unification Minister Jeong Se-hyun appeared on Buddhist Broadcasting on Thursday and said, “North Korea and Iran are cooperating closely on technology connected with missile launching, and Iran recently succeeded with the satellite vehicle it launched.” Jeong added, “We have to view it as a strong possibility that North Korea will succeed this time as well.” In February, Iran succeeded in launching its independently developed carrier rocket Safir 2, loaded with the satellite Omid. Analysis suggests North Korea seems to be confident of their success due to the data and technology transfer from Iran.

The U.S. and Japan are deploying two Aegis systems, each in the East Sea, loaded with SM-3 missiles to prepare for the interception of any ballistic missiles that have left the Earth’s atmosphere. The Japanese government is calling for a Security Council meeting Friday to issue the order for the destruction of the missile based on its Self Defense Forces Act. South Korea is scheduled to deploy its Aegis-equipped destroyer Sejong the Great to the East Sea, but because the firing range for the attacked SM-2 missile is only 148km, its ability to intercept a rocket flying at a high altitude from North Korea is limited. Sejong the Great is expected to handle the tracking and detection of any launch.

http://nobasestorieskorea.blogspot.com/2009/03/who-is-afraid-of-activists-against-war.html
Saturday, March 14, 2009
Who is afraid of the activists against the war exercise?

Posted by NO Base Stories of Korea at 7:22 PM