Text fwd: Defense burden-sharing funds will be used for the relocation of U.S. Secondary Infantry Division 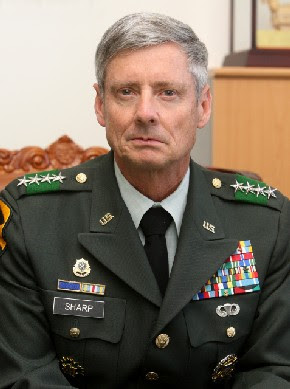 *Image source/ caption*
Same as the article below

‘US Army Gen. Walter L. Sharp, commander of US forces in South Korea.’

http://english.hani.co.kr/arti/english_edition/e_international/345844.html
Defense burden-sharing funds will be used for the relocation of U.S. Secondary Infantry Division Commander of U.S. Forces in Korea:
“S. Korea will fund a significant portion of the costs of this realignment”
Posted on : Mar.24,2009 11:48 KST Modified on : Mar.24,2009 12:08 KST

It has been belatedly made known that U.S. Army General Walter Sharp, commander of U.S. Forces in Korea, announced that defense burden-sharing funds offered by South Korea “will fund a significant portion of the costs associated with this realignment” of the U.S. Army’s Second Infantry Division. In 2004 an agreement was reached between the two countries to consolidate U.S. military bases, relocate the main base outside of Seoul, and return land use to South Korea. The two governments, however, have since differed over how to share joint defense costs.

Sharp has stated, “The majority of costs associated with the implementation of YRP (Yongsan Relocation Plan) will be paid by the ROK (Republic of Korea)” in his report U.S. Senate Armed Services Committee hearing on March 19. However he did not specify how much South Korea will fund for the relocations.

Further, the U.S. Congress has recently allocated US$125 million to build family housing units at the Pyeongtaek base, to which Sharp acknowledges as a “powerful message” to South Korea. Accordingly, there is some possibility that the U.S. in turn ask South Korea to contribute to this $1.4 billion fund which will be spent towards supplementing rent money for the families of U.S. Forces personnel living in Korea.

Senior Activist at the Solidarity for Peace and Reunification of Korea Yoo Young-jae has said, “The U.S. will use 1,119.3 billion won of defense burden-sharing funds, which it has accumulated, as well as part of the annual defense burden-sharing funds worth more than 760 billion won to move its Second Infantry Division.” So, Yoo said, “It seems that South Korea already funds the relocation of the U.S. Second Infantry Division, a cost that the U.S. originally promised to pay.”

Please direct questions or comments to [englishhani@hani.co.kr]
Posted by NO Base Stories of Korea at 8:11 AM