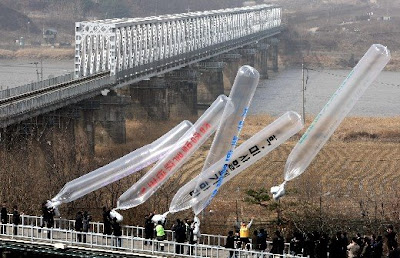 The groups first tried to send the balloons in February, but failed to send them all due to the direction of wind.
© 2006 The Hankyoreh Media Company.

http://english.hani.co.kr/arti/english_edition/e_northkorea/344759.html
[Analysis] Will the North close the border again?
North’s future course of action will depend on how it evaluates the effects reaped thus far compared with its initial goals
Posted on : Mar.18,2009 11:17 KST
© 2006 The Hankyoreh Media Company.
Posted by NO Base Stories of Korea at 10:01 PM