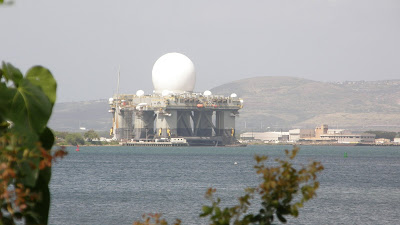 Today, I delivered on behalf of our membership, a letter to the United States Secretary of Defense Robert M. Gates urging the use of all available missile defense assets to the maximum capability to prepare in the face of the uncertainties of the North Korea "Space Launch" that might pose a threat to Alaska, Hawaii and other regions of the United States.

One of the United States most valuable assets and the best discriminating and tracking sensor for ballistic missile defense, the Sea-Based X-Band Radar (SBX) has not been deployed and has been docked for the past several months at Ford Island, Pearl Harbor, Hawaii. The SBX was the main sensor in the recent successful long-range ballistic missile intercept on December 5, 2008 providing the primary targeting information for the Ground Based Interceptor (GBI) out of Vandenberg Air Force Base, CA. that successfully intercepted a long-range ballistic missile from Kodiak Island, Alaska.

The December 5th, 2008 test simulated a North Korean long-range missile threat using the current U.S. missile defense deployed assets designed for a long range ballistic missile intercept. The SBX was also successfully deployed and used with the Aegis Sea-Based Missile Defense System for the February 21, 2008 successful NRO satellite shoot down which had a 1 in 45 chance of harming human life if not intercepted. The SBX is a self propelled X-band radar and has a sea speed of up to 10 knots per hour.

If deployed the SBX can begin to emit its sensor 50 or so miles from Hawaii and can become effective by providing sensoring information to the deployed long-range missile defense system in place today. The SBX cost $950 million dollars to build and costs additional tens of millions of dollars to maintain and operate annually.

The azimuth or launch direction for an ideal space orbital launch from North Korea using optimal rotation of the earth is in the mid-80s which over flies the country of Japan and heads east towards the Pacific Ocean. The azimuth for a long-range ballistic missile from North Korea to Hawaii is in the similar 80s degree range. North Korea has declared two "clear zones" on either side of Japan for the first and second rocket stages accounting for the debris falling from their rocket or missile launch. The North Korea trajectory following that flight path would terminate close to Hawaii if the rocket failed to achieve orbit or was a long range ballistic missile launch.

The SBX is the most powerful and most capable sensor to discriminate the debris, payload and a possible reentry vehicle in detail from a North Korean long range missile or rocket launch traveling at extreme high speeds across the Pacific Ocean.

Below is the text of the letter sent to Secretary Robert M. Gates:

As Chairman of the Missile Defense Advocacy Alliance representing 10,000 members nationwide with a 7 year consistent record of promoting the development and deployment of a robust missile defense capability for the United States, I am compelled to write to you regarding my concern for America's actions in the face of the growing North Korean missile threat. While I recognize the right of every sovereign nation to pursue a peaceful space program, I believe you would agree that the upcoming North Korean "space launch" could very well have military implications for the future and in the near term, threaten Alaska, Hawaii or other regions of the United States. Therefore, I urge that you consider activating all available missile defense assets to the Pacific to protect against an errant space launch attempt or a ballistic missile launch that threatens the United Stares or our allies. By way of reference, I understand that the assets deployed for the successful intercept of a long range ballistic missile target this past December 5, 2008 can put the United States in the most effective posture to counter any North Korean action in the next few weeks.

On a personal level and by the full support of my membership, I encourage you to place all of our Missile Defense assets in the Pacific region in the best position to counter the ambiguity that North Korea has historically demonstrated.

Posted by NO Base Stories of Korea at 2:14 PM