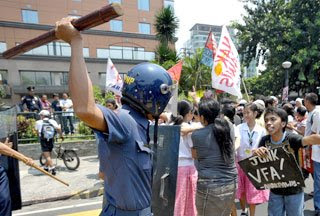 * Image source*
Same as the article below
'An anti-riot policeman (L) tries to disperse a group of students who gather in front of the US embassy in Manila to protest the Visiting Forces Agreement (VFA).'

Filipino anti-riot police have clashed with a group of students who were
demanding the withdrawal of US troops from the Philippines.

Dozens of protesters, who gathered outside the US embassy in Manila on Tuesday
to protest a military treaty between the two countries, were injured in the
clash.

The protesters say the treaty does not grant equal rights to Filipino and
American citizens and treats Filipinos as "second-class citizens of the United
States."

The demonstrators pointed to the case of the US soldier, Lance Corporal Daniel
Smith, who was detained in 2006 after convicted of raping a Filipino woman.

The case strained military ties between Washington and Manila and fueled
anti-American sentiment in the Philippines.

Philippines: US To Lead Large-Scale War Games
Posted by NO Base Stories of Korea at 7:01 AM