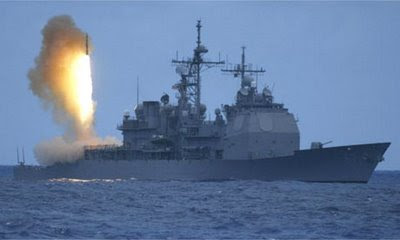 * Image source*
Same as below
'Navy Aegis destroyers are outfitted with "missile defense" systems and are built in Bath, Maine.'

I've had quite a lot of emails today in response to sending out the Jan Tamas announcement last night that the Czech Republic government had fallen. People know that this was an issue high on the priority list of the Global Network and I've tried to keep it fresh in the minds of those who follow our work. Without a doubt this is a great achievement for those in the Czech Republic but it also gives all of us heart. It's not often our side sees a victory like this.

Another interesting article that landed in my email box last night was from DoD Buzz which describes itself as an "Online Defense and Acquisition Journal." The publication reported on the just finished Pentagon Missile Defense Agency (MDA) conference in Washington where they acknowledged that the testing program for the Ground-based Midcourse Missile Defense program – or GMD – was not going well. In addition the MDA admitted that the Airborne Laser program was four years behind schedule and billions of dollars over budget. These two programs, and others facing similar problems, are likely to see some level of cutbacks in funding.

In a speech at the MDA conference Sen. Carl Levin (D-MI) stated, “Missile defense is an important element of our nation’s defense. For example, it is a high priority to field effective defenses for our forward-deployed forces against the many hundreds of existing short- and medium-range missiles. Patriot and the Aegis BMD system are already providing such protection, and THAAD is expected to begin fielding soon. We will need more of these capabilities.”

Sen. Levin was acknowledging that these programs are having much greater success in their testing phase and thus will continue to receive funding and priority deployment consideration.

I think the key point here is that there are going to be some changes in the Star Wars and "missile defense" programs in the coming months. Largely because of the economic crisis here in the US the Pentagon has to start justifying some of their programs that just flat out are not working well. Some of them will be cut and others pushed back onto slower production and testing schedules.

But other programs (like the Navy's Aegis missile defense system pictured above) are having success in their testing phase and will continue to be "forward deployed" in the Asian-Pacific, Middle East, and other "hot spots" where the US wishes to show the flag.

So while we are excited that the Czech Star Wars radar deployment is now in doubt, and that the GMD program could be cut back, we've got to keep our eyes on these other "more successful" programs that will not only continue but will also likely be expanded.

So it's a mixed bag - we've got to stay on top of the details if we hope to understand what is coming down in the near future on these space technology issues.

posted by Bruce Gagnon
Posted by NO Base Stories of Korea at 9:50 PM