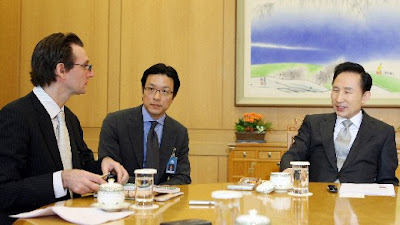 * Image Source/ caption*
Same as the article below

'President Lee Myung-bak gives an interview to the Financial Times at the Blue House on March 30. He says he “intended to keep open a jointly run industrial enclave in order to foster dialogue even if Pyongyang tests a long-range missile in coming days.”'

In an interview published Tuesday in the British business daily Financial Times, President Lee Myung-bak stated, “Our ultimate objective is to convince North Korea to fully give up their nuclear weapons and also to usher in an era where the two Koreans will be able to coexist.” He added that taking a harder stance would not necessarily be helpful in achieving that ultimate objective. The interview took place Saturday at the Blue House.

Regarding the South Korean government’s response following North Korea‘s “satellite” launch, Lee formally announced a position both opposing a military response. He indicated his intention of supporting the ongoing operations of the Kaesong Industrial Complex.

Analysts are interpreting Lee’s position as indicative of a sober consideration of the reality of the North Korea issue, in which a hard-line response does not prove to be the best option. It also rearticulates a position regarding inter-Korea conduits during times of ‘crisis,’ keeping a minimal level of communication open.

Lee’s statements were characterized throughout by a consideration of the current international situation in which enacting sanctions against North Korea following a “satellite” launch would prove difficult. Indeed, it would be implausible to carry out effective sanctions against North Korea when two permanent member nations with veto power on the United Nations Security Council, China and Russia, are essentially opposed to such sanctions at the Security Council level.

The United States is engaging in a diversionary strategy of stating opposition to North Korea’s rocket launch, while also emphasizing the need for dialogue with North Korea. Appearing Sunday (local time) on Fox News, U.S. Secretary of Defense Robert Gates said that the U.S. has no plans to intercept a North Korean missile.

Previously, Stephen Bosworth, the U.S. Special Representative for North Korea Policy, sent a message of interest in dialogue with Pyongyang when he said in an interview Saturday with the Washington Post “Ideally, one would like to meet with the leader.” In light of this, analysts interpret President Lee‘s statement as reflecting the outcome of previous efforts to harmonize opinion between South Korea and the U.S., or at least minimally, taking into consideration trends in the Barack Obama administration.

Some analysts are concerned that in such a situation, the scope of South Korea’s activity could be curtailed if it continues adhering to its ineffective hard line in responding to North Korea. The government has been forced to bear in mind the changing international situation in which it appears that six-party talks and other forms of dialogue may resume after a certain cooling-off period.

It also appears to experts that President Lee was obliged to take into account negative public response to the heightening of tensions around the Korean Peninsula, including military clashes between the two Koreas. In terms of inter-Korean relations, Lee‘s statement indicates that the government will focus on managing the situation rather than aggravating relations with a hard-line response.

Moreover, South Korea has no means of independently responding with military force to a North Korean rocket launch. While it could carry out a preemptive attack with an F-15 fighter on the North Korean launch site, this is not a viable option because it would mean all-out war. The current SM-2 missile attached to the Aegis destroyer Sejong the Great is for air defense use only and could not be used to intercept a ballistic missile.

While government authorities have made a few references to maintaining the Kaeseong Industrial Complex, Lee’s statement can be interpreted as a clear and formal reiteration of the government‘s policy on it.

However, it is difficult to interpret it as either an active gesture of appeasement towards Pyongyang or a complete change in the tenor of North Korea policy as the government is still actively examining full participation in the Proliferation Security Initiative on weapons of mass destruction. A Cheong Wa Dae (the presidential office in South Korea or Blue House) official interpreted the President Lee’s interview on Monday as expressing he “has no intention of unilaterally worsening economic cooperation efforts, but neither does it plan to expand these efforts if North Korea keeps this up.”

Lee’s interview signals no great departure in the midst of managing this crisis from the previous tenor of inter-Korean relations, indicating a preference for a policy of engagement at the minimal level of dialogue and interchange, in lieu of a policy of closure or tolerance.