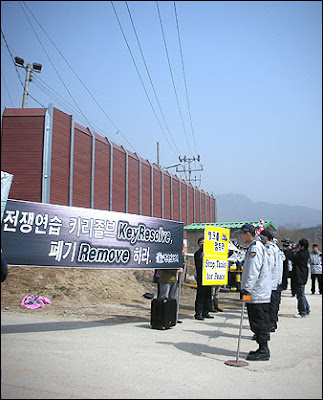 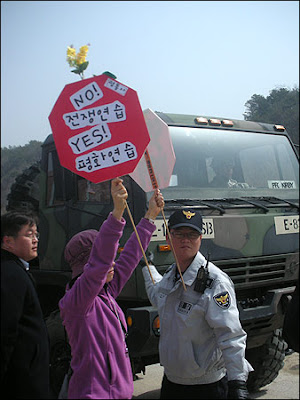 The Solidarity for Peace And Reunification of Korea did the picketing in front of the gate of the Rodriguez Complex Range, Pochun, where there was the Combined Arms’ military training by the Joint US-SK Marines on March 17, 2009.

The activists say the fence were built (as in the first photo) for this year’s training. The fence were not shown last year, March 8, 2008 (last photo),

http://nobasestorieskorea.blogspot.com/2009/03/spearhead-troops-in-iraq-war-had-war.html
Tuesday, March 17, 2009
Spearhead troops in the Iraq War had a War exercise training with the real bullets in the Rodriguez Complex Range, Pochun, near the Korean DMZ
Posted by NO Base Stories of Korea at 6:36 PM