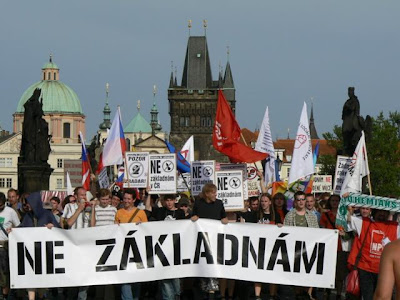 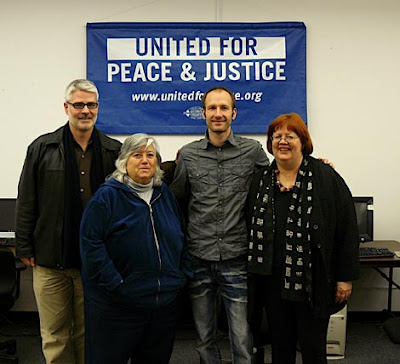 A Japanese woman, Makiko Sato has informed the No Base stories of Korea about the international solidarity signing movement with the people of Czech Republic. Thanks very much, Makiko!

- The text also informed in http://www.nenasili.cz/en/3261_stunning-victory-for-czech-opponents-of-us-radar-base

STUNNING VICTORY FOR CZECH OPPONENTS OF U.S. RADAR BASE

NEW YORK, March 18, 2009 – In a major setback for Pentagon plans to install a U.S. military radar base in the Czech Republic, the Czech government yesterday withdrew, at least for now (and possibly for good), its proposal to ratify an agreement on the base. Czech Prime Minister Mirek Topolanek halted the ratification process when it appeared that the Chamber of Deputies was likely to vote to reject the agreement. According to Jana Glivicka, a leader of the grassroots “No Bases Initiative” that has been active in opposing the radar for more than two years, this was a very significant retreat, since the radar has been promoted as one of the key accomplishments of the current government.

Two thirds of Czechs have consistently opposed the radar ever since it was first proposed in 2006. Anti-radar activists have repeatedly called for a referendum on the issue, but have been rebuffed. Meanwhile, in 2008 the Czech government signed the agreement with the United States to proceed with the installation of the radar, and the Czech Senate approved the accord. However the agreement could not be implemented until the Czech Chamber of Deputies ratified it. Thanks to the tireless activities of anti radar groups in the country, the No Bases Initiative and the Nonviolence Movement, popular opinion remained strongly mobilized against the radar. This public opposition culminated in a likely “no” vote in the Chamber.

The anti-radar movement has drawn support from around the world from people alarmed by the dangerous military escalation of the proposed European “missile defense” program of the Czech radar and its companion Interceptor missiles in Poland. In the United States, the Campaign for Peace and Democracy has since November 2007 supported the movement with public statements, letters published in The New York Times and The New York Review of Books, visits to the Czech Mission to the United Nations, demonstrations, a hunger strike, and, over the past weekend, an open letter to members of the Czech Chamber of Deputies signed by more than 550 people in less than 48 hours.

The CPD open letter was sent on Monday March 16 to all 200 members of the Chamber of Deputies. A member of the Chamber planned to read the letter aloud from the floor of the Chamber if the ratification had come up for a vote, Signers included public figures such as Noam Chomsky and Ariel Dorfman, and leaders of many major U.S. peace organizations. Most signatories were from the U.S., but there were some international signers including the Polish intellectual Adam Chmielewski, Iranian human rights activists, and a number of individuals from the United Kingdom, Japan and other countries. The text of the letter and list of signers are available at the CPD website, www.cpdweb.org

Czech Prime Minister Topolanek said that the government has not abandoned its plan for the radar. "This does not mean we would give up on the ratification process," Topolanek said in a live television address. "We will return to this issue after talks with the U.S. administration and after the NATO summit in Strasbourg and Kehl." (This information is from a Reuters story. Up until now there has been no significant U.S. media coverage of the withdrawal of the Czech government proposal.) It is by no means clear that the government will in fact reintroduce the radar for a vote after the NATO summit in early April. In any event, anti-radar activists in the Czech Republic and their international supporters are committed to continuing their campaign until such time as the proposal to install the radar is decisively and permanently withdrawn.

THE CAMPAIGN FOR PEACE AND DEMOCRACY (CPD) advocates a new, progressive and non-militaristic U.S. foreign policy -- one that encourages democracy, justice and social change. Founded in 1982, the Campaign opposed the Cold War by promoting "detente from below." It engaged Western peace activists in the defense of the rights of democratic dissidents in the Soviet Union and Eastern Europe, and enlisted East-bloc human rights activists against anti-democratic U.S. policies in countries like Nicaragua and Chile. The Campaign sees movements for peace, social justice and democratic rights, taken together, as the embryo of an alternative to great power politics and to the domination of society by privileged elites.

Other current CPD campaigns are an open letter to Iranian officials in defense of human rights leader Shirin Ebadi, published

by the New York Review of Books at http://www.nybooks.com/articles/22511, and a statement on Gaza entitled “No More Blank Check for Israel!,” available at the CPD website.

* Czech version of open letter *
Posted by NO Base Stories of Korea at 7:58 AM