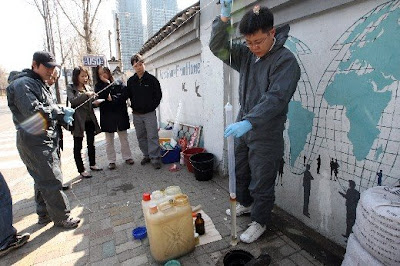 'Employees of Korea Rural Community & Agriculture Corporation testing samples of underground water quality at the street near the U.S. garrison in Yongsan District, Seoul on March 23.'

On March 23 a group of workers gathered at the tall observation well that stands by the road linking the Samgakji subway station with the Seoul Station opposite of the Yongsan Army Garrison. The workers of Korea Rural Community Corporation are contracted with the city of Seoul to remove oil leaks from U.S. military installations. The workers come to this site once a month to clear oil found inside the observation well.

Clean-up has been taking place since July 2006 when a large amount of oil leaking from the Yongsan Army Garrison in central Seoul was found. The well’s inside has been so blackened due to oil leaks that it seems to be an endless abyss, and when the palm-sized cover of the observation well opens, an odor of oil comes out. The workers place oil detectors inside the well and use a tube to pump out the underground water. When the tube comes out, dark brown oil and underground water exude separately. The ends are place in a 500 ml bottle, and this time it took only five minutes to fill the bottle up with oil.

Since 2001, the city of Seoul has spent 2.1 billion won removing floating oil in regions near the Yongsan Garrison. Reports indicate it spend an additional 425 million won this year.

There are many other areas polluted by U.S. military installations--The area surrounding the Yongsan Army Garrison is not the only area polluted by the U.S. military. For example, around 16,000 metric meters of land near the Noksapyeong station has been deemed polluted.

On March 19, the Ministry of Foreign Affairs and Trade announced the results of its negotiations with the U.S. on the return of land used for military installation. Critics, however, say that it failed to reach an agreement on how to clear left-over hazardous waste and how to divide the cleanup costs. The ministry said that it will extend the period of field inspection from 50 days to up to 150, while introducing a “damage assessment” system prior to land return in order to determine the level of hazardous waste caused by military installation use. Green Korea, a civic group, expresses concern that the damage assessment system is based on U.S. environmental standards rather than domestic ones, and calls for the government to seek renegotiation.

Please direct questions or comments to [englishhani@hani.co.kr]
Posted by NO Base Stories of Korea at 2:26 PM