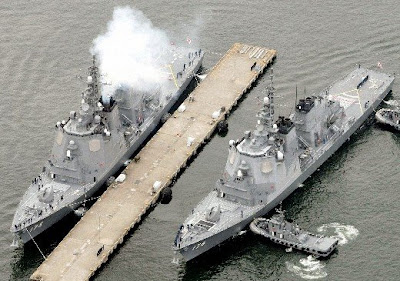 * Image Source*
Same as article below

"Japan Maritime Self-Defense Force‘s (JMSDF) ballistic missile defense ships Chokai (R) and Kongou leave from a port of JMSDF Sasebo Base in Sasebo, southwestern Japan, March 28, 2009. Japan ordered its military on Friday to prepare to intercept any dangerous debris that might fall on its territory if a missile launch planned by North Korea goes wrong. (REUTERS/Kyodo)"

http://english.hani.co.kr/arti/english_edition/e_northkorea/346942.html
S. Korea-U.S.-Japan step up their joint response against N. Korea’s imminent “satellite” launch:
However, with China and Russia opposing sanctions against Pyongyang, coordinated responses to North Korea are in question
Posted on : Mar.30,2009 12:42 KST Modified on : Mar.30,2009 16:53 KST

With North Korea‘s “satellite” launch imminent, South Korea, the U.S. and Japan are stepping up their efforts to determine a joint response to what they suspect is a cover to test-fire a long-range missile. However experts worry differences in opinion with China and Russia indicates that the five powers face hurdles in developing a coordinated strategy.

Emerging from a two-hour long meeting with Stephen Bosworth, U.S. special envoy to North Korea, and his assistant Sung Kim on March 27 (local time), South Korea’s top negotiator Wi Sung-lac said, “We discussed the issues of referring (the launch) to the (U.N.) Security Council and resuming the six-party talks.” He added, “A satellite launch by North Korea would be found in violation of the 1718 U.N. resolution, and we will respond accordingly.”

On the same day, Akitaka Saiki, Japan‘s chief delegate for the six-party talks, held a bilateral meeting with his U.S counterparts. “(If the North goes ahead with the launch), we will immediately refer it to the U.N. Security Council. I believe there is no discord (among the three nations) on this matter.”

These remarks by the top negotiators from South Korea, Japan and the U.S. offer no more than a reconfirmation of earlier statements. A coordinated front on countermeasures proves difficult, however, as China and Russia remain lukewarm regarding deploying sanctions. Meanwhile both China and Russia have tried to dissuade the North from proceeding with the satellite launch.

Indeed, the Russian government reportedly concluded that it would not violate the 1718 resolution if the North launches a satellite. The Chinese foreign ministry has called for Japan to remain calm in relation to Pyongyang’s move to launch a rocket, according to the Mainichi Shinbun newspaper. China reportedly says that they agree to issue an U.N. chairman’s statement in response to North Korea’s launch and opposes taking any action beyond that.

Meanwhile, Pyongyang and Washington are busy seeing who can maintain the upper hand. Bosworth told the Washington Post on March 28 that he wishes to meet North Korean National Defense Commission Chairman Kim Jong-il, during the six-party talks, he will focus to develop more comprehensive policies regarding disarmament, that include bilateral talks with Pyongyang.

However, Secretary of State Hillary Clinton recently told Fox News that it will be tough for North Korea to receive energy and food aid if it goes ahead with the missile launch.

The North remains recalcitrant. On March 26, a North Korean foreign ministry spokesman said, “There will be no six-party talks should this matter (of the launch) be referred to the U.N. Security Council.” Two days later, the Chosun Shinbo, a newspaper published by the General Association of North Korean Residents in Japan, reiterated that Pyongyang is aiming to launch a “satellite” for peaceful space-development purposes.

http://nobasestorieskorea.blogspot.com/2009/03/text-fwd-for-warm-solidarity-with.html
Saturday, March 28, 2009
Text fwd: For warm solidarity with the friends in the Czech and against the propaganda against the North Korea