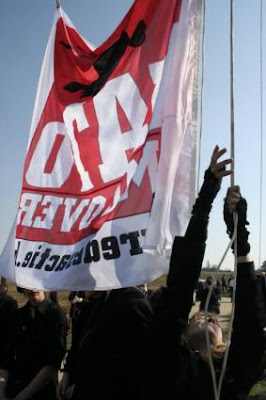 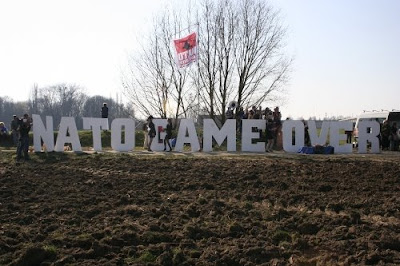 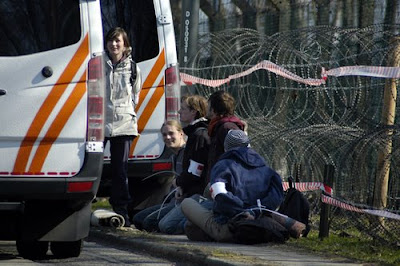 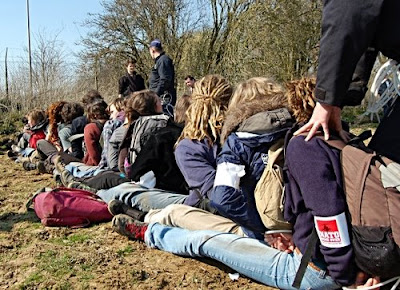 From all over Belgium, by bus, bike, taxi, public transport and even by walking, hundreds of activists came to NATO's headquarters in Evere, Brussels. They tried non-violently to enter the NATO terrain and seal gates, windows and doors. At the same time, the NATO has been symbolically buried during a farewell ceremony. Today, this burial is still a symbolic act, but the will to turn this symbol into reality is very high.

Despite the massive presence of police forces equipped with water canons, helicopters, horses, kilometres of barb wire, ... several activists managed to enter the military base to seal gates, windows and doors. 450 peace activists have been arrested and showed clearly that Vredesactie and the Bombspotters do not let the NATO keep going with its business as usual.

"I left Liège this morning and we joined the group from Brussels. We have left the bus on the east side of NATO headquarters and we have spread in smaller groups. There was a lot of police there. I have been arrested very quickly while I was walking towards the fence, but I have seen at least one person who managed to climb over the fences with the support of other participants. Anyway, we have been able to send our message very clearly : NATO must be shut down and the NATO nuclear weapons must disappear !", said Fabien, one of the many participants.

NATO GAME OVER is an action of civil disobedience. We commit an offence trying to prevent severe crimes. We are justified by international law. All over Europe, people campaign against NATO. Today, not only Belgium, but also the Netherlands and Germany have seen actions. In the Netherlands, activists occupy the military terrain of Nieuw Milligen, where DARS is deployed, NATO's mobile air surveillance and command system. In Germany, people protest at Büchel nuclear weapons base and NATO's headquarters in Heidelberg.

NATO is on the threshold of a fundamental reconfiguration. The Strasbourg NATO summit will not only be NATO's 60th anniversary celebration, it will also be the official start of the discussion on a new Strategic Concept. This document will define the direction of NATO for the years to come. This will be a crucial period for the alliance, and hence for Belgium's foreign and defence policy as well.

Due to NATO membership, Belgium fights a war in Afghanistan. Eight years after the start of the war we don't see any progress. In Afghanistan, NATO is stuck in a dead end. Nevertheless, our government does not hesitate to send extra troops and jet fighters. NATO agreements make Belgium and other European countries a logistic hub for the US army. The American war machine is transported on our roads, harbours and airports to the wars in Iraq and Afghanistan. Meanwhile, NATO deploys 150 to 240 US nuclear weapons in Germany, Italy, Belgium, The Netherlands and Turkey. According to international law, these weapons are just as illegal as elsewhere. The removal of the US nuclear weapons out of Europe would mean an important boost to the multilateral non-proliferation process and a significant step towards nuclear disarmament worldwide.

With the NATO GAME OVER campaign, we give our government, two weeks before the Strasbourg summit, a message that's hard to ignore: a military alliance which intervenes worldwide, which deploys nuclear weapons and is prepared to use them, is a threat to world peace. 60 years of NATO is more than enough.

The Strasbourg NATO summit itself will not go unnoticed. From April 1st to April 5th, an international action camp will be organised as a home base for actions and demonstrations. An international counter summit will start on April 3rd. It will be a platform for a broad range of speakers and groups to express their opposition and criticism against NATO and military globalisation. This conference will be interrupted for the actions on Saturday, to continue on Sunday April 5th. Early morning April 4th, hundreds of activists will try to prevent NATO from meeting with massive street blockades. This action is organised by a coalition of German, French and international groups, one of which is Vredesactie. In the afternoon the broad coalition 'No to war - No to NATO', who also organises the conference and, calls for a big demonstration in the city of Strasbourg.