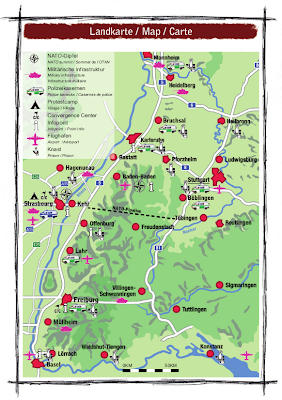 Fwd from Elsa Rassbach, Agatha haun
[nousbases] "NATO: After 60 Years, Out of Area - or Out of Business?"


INFORMATION FOR THE PRESS

Berlin, March 27, 2009. On the morning of April 4th, some twenty
heads of state (including U.S. President Barack Obama, French
President Nicolas Sarkozy and German Chancellor Angela Merkel) will
shake hands for a photo-op on the bridge across the Rhine River that
connects the German town of Kehl with Strasbourg in France, seat of
the European Parliament and the Council of Europe. At this, the 60th
anniversary of the NATO Alliance, which France has recently rejoined,
the heads of NATO states will consider ratifying a new Strategic
Concept for NATO as a military force intervening in countries around
the world. The preceding night the NATO heads of state will attend a
gala dinner in the German spa resort city of Baden-Baden.

On both sides of the Rhine, President Obama and the other NATO heads
of state will be greeted by demonstrations expected to be at least as
large as those that met President Bush at the G8 Summit in
Heiligendamm, Germany, in 2007. Since last June, activists from at
least 20 European countries and the U.S. (including intellectuals,
scholars, trade unionists, and people of all ages and walks of life)
have been planning the demonstrations. Now they are contending with
massive police and military security preparations in France and in
Germany. So far, the protesters have not yet received permission form
the French authorities for a peaceful demonstration in the city
center of Strasbourg to oppose decisions by NATO heads of state that
will have an impact on European citizens far into the future.

Some 900 security personnel are to be flown in from the U.S. to
accompany President Obama, who will be staying at the Strasbourg
Hilton. More than 30,000 German and French police and military
personnel have been engaged to suppress the protests in "security
precautions" that even exceed those for the visits of President
George W. Bush to Stralsund, Germany, in 2006 and to Heiligendamm in
2007. Already last week, 450 anti-NATO demonstrators were arrested on
March 21st near NATO headquarters in Belgium. French and German
citizens have been issued curfews, and many must carry special badges
just to enter their own neighborhoods. Citizens have even been
ordered by police to remove peace flags from their windows. There
are indications that the German and French police and military are
receiving their orders directly from U.S. Homeland Security.

NATO is on the threshold of a fundamental reconfiguration. The
Strasbourg NATO Summit will be the official start of the discussion
on a new Strategic Concept that will define the direction of NATO for
the years to come. NATO was founded in 1949 during the Cold War with
a mandate to defend the member nations on their own soil. Rather
than disbanding NATO at the end of the Cold War, the U.S. and other
world leaders have pursued an expansionist agenda since 1991,
including “out of area” wars in the Balkans and in Afghanistan/
Pakistan, along with escalating military budgets: NATO countries now
account for 75% of global military expenditure..

Under U.S. leadership, NATO seeks to make decisions regarding
military missions without agreement by the United Nations. In
Strasbourg some NATO leaders will even seek to abolish the consensus
decision-making process within NATO itself, thus forcing "unwilling"
nations in NATO to go along with wars with which they disagree. At
the same time, more countries are being offered NATO membership in an
effort to encircle Russia and strategically important areas in the
Middle East. Proponents and opponents of NATO both view the war in
Afghanistan and Pakistan, to which the U.S. is committing
significantly more troops, as a key test for the “out of area”
intervention concept.

Large numbers of European citizens do not want their countries to be
drawn into wars, whether through paying for the costs or through
contributing soldiers or through allowing the U.S. and/or NATO to
conduct wars using military bases on European soil. According to some
surveys, more than 70% of Germans oppose the Afghanistan war, but
German citizens were not allowed to carry any protest banners when
presidential candidate Obama spoke in Berlin last July. French
citizens have long been proud of some measure of independence from
the U.S., and many strongly disagree with President Sarkozy’s
decision to bring France back into NATO. There have been massive
protests and civil disobedience against U.S. and NATO military bases
in Italy, Greece, and Spain. In Ireland, widespread public
opposition forced the U.S. to shift much of the U.S. troop transport
away from Shannon commercial airport to the Leipzig commercial
airport in Germany. And the Czech government fell on March 24th, in
large measure due to opposition to the government’s support of the
proposed U.S. “Star Wars” radar base that is opposed by ca. 70% of
Czech citizens. (Following the NATO Summit in Strasburg, President
Obama will travel to Prague for a U.S.-European Union Summit on April
5th, where he will also be met by protests.)

U.S. peace organizations have endorsed the appeal for the anti-NATO
demonstrations, among them the largest U.S. umbrella peace
organization, United for Peace and Justice (UFPJ – with more than
1000 member organizations), and Code Pink. For the full text of the
NATO appeal and endorsing organizations in the U.S. and in 32 other
countries, see http://www.no-to-nato.org/en/appeal/

Speakers from the U.S. who will be in Strasbourg include Phyllis
Bennis of the Institute for Policy Studies (IPS), Joseph Gerson of
American Friends Service Committee (AFSC) and the international No
Bases Network, Jacqueline Cabasso of Mayors for Peace and the Western
States Legal Foundation, and Matthis Chiroux, a member of Iraq
Veterans against the War (IVAW) who was in Afghanistan. Professor
Emeritus Noam Chomsky is sending a videotaped speech. The many
international guests who will be speaking in Strasbourg include Tariq
Ali from the United Kingdom, Malalai Joya from Afghanistan, and
Tadaaki Kawata from Japan.

Websites with information about the NATO protests/congress in English:

Studies on NATO from the Information Center on Militarization in
Tübingen, Germany (in English translation):