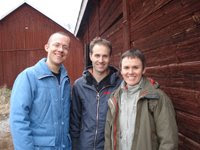 Text fwd by Per Herngren and Frank Cordaro

In the early morning of March 22th three disarmers were arrested at
Saab Aerospace Systems’ weapons factory in Linköping, Sweden. Martin
Smedjeback, Annika Spalde and Pelle Strindlund were on their way to
disarm Jas 39 Gripen fighter jets, planes intended for export to
India, Thailand and South Africa. The peace activists, who are all
part of the anti-militaristic network Ofog, entered Saab’s industry
area in Linköping by cutting holes in the barbed wire fence
surrounding the area. Once inside they held a silent minute, dedicated
to the twenty children that die every minute because of poverty in a
world that invests more money in weapons than in fighting poverty.

In 2010 the Indian air defense will order 126 Jas 39 Gripen fighter
jets. Saab is currently marketing these jets in India with much
support from the Swedish government. If Saab gets the contract,
Swedish jets could be loaded with weapons of mass destruction, as part
of the Indian nuclear weapon program.

– India’s 200 billion starving citizens don’t need expensive fighter
jets. What they need is food and clean water. When I was in India in
February, I saw the widespread poverty with my own eyes. Several
Indian organizations begged us Swedes to stop the weapons export to
their country, says Martin Smedjeback, 35, non-violence educator.

As a symbol of the Indian resistance the activists put a picture of
the Indian activist Elsey Jacob on the fence before going inside. A
picture of the South African bishop Desmond Tutu was also put up. Tutu
is working to make his government cancel the Jas 39 Gripen affair. In
1999 Saab managed to sell 28 Jas 39 Gripen to South Africa to a total
of 17 billion Swedish crowns. South African social movements criticize
this affair of being bribed. Beside, many critics claim that this
weapon affair is taking resources from fighting poverty and HIV in
South Africa.

– I simply can not accept that my country, by its weapons export,
breeds conflicts and poverty. Sweden will deliver six Jas 39 Gripen to
Thailand, despite the fact that the chief of Thai air defense declared
in public that the planes will be used in the armed conflict in the
southern parts of the country. The affair with South Africa is just as
objectionable. According to the South African Christian council, the
agreement should be stopped immediately. According to them the
country’s largest enemy is poverty and that the money is needed for
that struggle, says Annika Spalde, 39, author and lay worker in The
Swedish church.

– In general, we should follow the law, but senseless obedience is not
in any way worth striving for. Civil disobedience by peacefully
objecting the law, can be an obligation in certain situations. When
governments and companies cooperate to export weapons to poor
countries and conflict zones, it is ordinary citizens’ duty to
intervene, says Pelle Strindlund, 37, author.

The action in Linköping, Sweden, is part of the campaign ”Avrusta”
(Disarm) launched in the autumn of 2008. By public opinion raising and
civil disobedience actions, the campaign aims to stop the Swedish
weapons export. In October 2008, two coordinated disarmament actions
took place in the towns of Karlskoga and Eskilstuna. Parts for
howitzer canon (FH77), going to India, and grenade launchers Carl
Gustaf, used by the American army in Iraq, were disarmed. Two of the
activists were sentenced to three months prison and demands of 220 000
Swedish crowns, and two other activists to four months in prison.

You find more information at www.avrusta.se. There you also find video
material from the action at the Jas 39 Gripen factory in Linköping,
and photos of the activists. All this material is free for use.