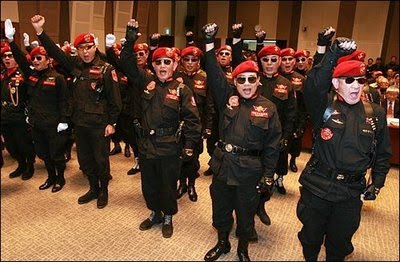 http://koreareport2.blogspot.com/2009/03/return-of-right-wing-terror-in-south.html
March 30, 2009
A Return of Right-Wing Terror in South Korea?

A civilian "Patriotic Mobile Force" [photo and article in Korean from OhMyNews] was created recently by ultra-conservatives in South Korea to "physically repel leftist protesters." What is disturbing is that the founders of this group, mostly ex-soldiers, are non-apologetic to the right-wing terror that was rampant in the post-liberation period of 1945 to 1950 when extreme violence and political assassinations were used to intimidate leftist and even moderate political forces. Presence of this group as counter-demonstrators in public protests will likely inflame the situation that is already tense due to stepped-up police crack-down of protesters.
Posted by NO Base Stories of Korea at 2:56 AM