Spearhead troops in the Iraq War had a War exercise training with the real bullets in the Rodriguez Complex Range, Pochun, near the Korean DMZ 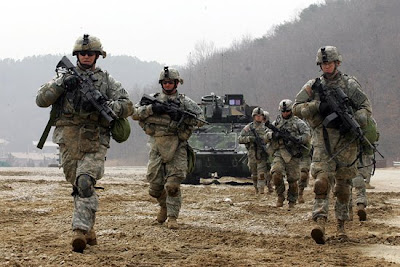 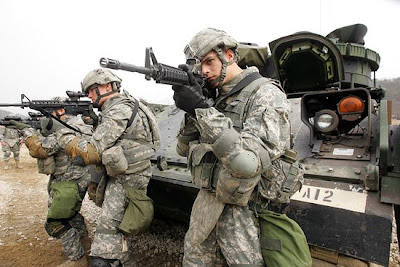 English summary from the Korean article of Jung, Myung-Jin, below

Spearhead troops in the Iraq war had a war exercise training with the real bullets in the Rodriguez Complex Range, Pochun, near the Korean DMZ, as part of the Key resolve/ Foal eagle war exercise(March 9 to 20) on March 16, 2009

The troops is called the ‘Hokins troop’ belong to the 3rd Infantry division of the United States military force. The training was publicly shown.

The 3rd division has attacked the Baghdad crossing the Euphrates river after the 4th days of the opening of the Iraq war in 2003.

The Hokins troop is one of the BCT(brigade combat team) which can be dispatched in 18 to 24 hours in any conflict areas in the world. Its main mission is to provide the force and equipment, once dispatched.

Seeing that the troop is participating in the war exercise, The troop is thought to be dispatched in the beginning of the war, if there is all aspects of war in the Korean peninsula.

On March 16, about 60 military personal and the two Bradley tanks were imployed for the training.

Early in the morning, about 30 South Korean tanks were shown to maneuver on the road of near the Rodriguez Complex Range

http://nobasestorieskorea.blogspot.com/2009/03/who-is-afraid-of-activists-against-war.html
Saturday, March 14, 2009
Who is afraid of the activists against the war exercise?
Posted by NO Base Stories of Korea at 6:06 PM