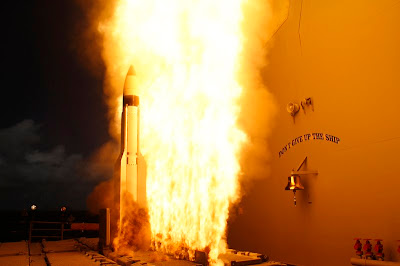 'Navy A Standard Missile 3 is launched from the cruiser Lake Erie in 2007 during a joint Missile Defense Agency and Navy ballistic missile flight test. Chief of Naval Operations Adm. Gary Roughead announced the coming formation of the Navy Air and Missile Defense Command during a speech before a business group March 4.'

Next month the Navy will establish a new command with missile defense in mind.

Adm. Gary Roughead, chief of naval operations, announced the coming formation of the Navy Air and Missile Defense Command during a speech before a business group Wednesday night in Northern Virginia.

“We’ll formally stand it up in April, but it will be the place where the Navy comes to bring together the thinking, the ideas, the concept, the intellectual effort for our air and ballistic missile initiatives, efforts and programs so that we can stay in the forefront of this important mission area,” Roughead told the group.

He said it will be based in Dahlgren, Va. — where the Navy has an existing facility — though further details about the new command were not readily available Wednesday night.

Tensions over ballistic missile launches have risen in recent weeks....Adm. Timothy Keating, head of U.S. Pacific Command...was quoted saying, “If a missile leaves the [North Korean] launch pad, we’ll be prepared to respond upon direction of the president.”

The Navy has had several successful ship-launched intercepts of test ballistic missiles. As of November, Navy shot 19 interceptor missiles at speeding targets and was successful in 16 attempts.

By upgrading existing Aegis radar systems and training ship crews to intercept airborne ballistic missiles, the Navy has been bolstering the usefulness of its older Flight I/II Burke-class destroyers, as well as some of its Ticonderoga-class cruisers.

Five are based out of Yokosuka, Japan: the cruiser Shiloh and destroyers John S. McCain, Stethem, Fitzgerald and Curtis Wilbur. Homeported in San Diego are the destroyers Decatur, Milius, Benfold, Higgins and John Paul Jones. Destroyers Stout and Ramage are the two Norfolk-based BMD-capable warships.

Roughead spoke at a meeting of the Fredericksburg Regional Chamber of Commerce Military Affairs Council. Also scheduled to speak was Rep. Robert Wittman, R-Va., following the showing of a film on ballistic missile defense.
===========================
Stop NATO
Posted by NO Base Stories of Korea at 4:39 PM