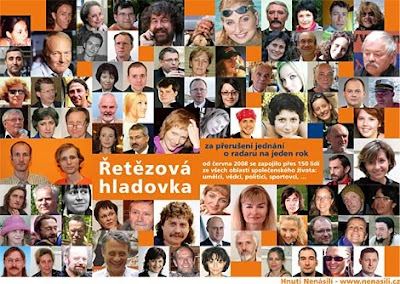 The protest in the Czech Republic against the installation of US military bases, part of the NMD system also known as Star Wars, had brought two young activists to start a hunger strike in May 2008.

The two humanists, Jan Tamas and Jan Bednar ended their hunger strike after 21 days. From that day on, every day, for one day, a celebrity went on a relay fast. Among the protesters were scientists, academics, actors, directors, sportspeople and Parliament members coming from different parties. They included actress, Anna Geislerova, director Zdenek Troska, scientist Peter Pokorny and Lubomír Zaorálek, Vice President of the Czech Parliament.

"More than 300 persons participated in this protest, it is the most significant protest after the Velvet Revolution in 1989," Jan Tamas declared. "The fall of the government represents a victory of democracy for us, that's why we decided to suspend the relay hunger strike."

On Sunday, April 5, the day of the United States President's visit to Prague, a new protest of the nonviolent movement is scheduled in the Czech Republic.

Jan Tamas, leader of the protest against Star Wars and President of the Czech Humanist Party, has become the spokesperson for more than 70% of the Czech population. The majority of Czechs are against the presence of military bases on their territory and foreign interference on their affairs. The Nonviolent movement's requests to Obama are that the US give the Star Wars project once and for all and to choose the politics of disarmament in a brave and resolute way. These are the only grounds for the beginning of a real process of peace and reconstruction.