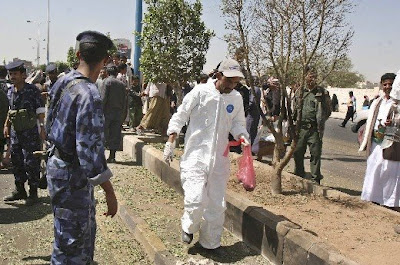 * Image source/ caption*
As in the original article below

‘A Yemeni investigator collects remains from the suicide bombing attack that targeted South Korean officials, in San’a, Yemen, Wednesday, March 18, 2009. A suicide bomber on Wednesday struck a convoy carrying South Korean officials sent to Yemen to investigate a bombing earlier in the week that killed four tourists from the country. No one was hurt, officials said. (AP Photo)’

Second attack in Yemen raises possibility of additional attacks on S. Koreans
: Al-Qaeda may not be stopping at isolated terror attacks and may have targeted Koreans after it saw the effects of the first incident

The situation in Yemen is taking a new turn as a government rapid response team sent to investigate a terrorist attack on Korean tourists in the city of Shibam was attacked Wednesday with what is believed to be a terrorist bomb. Some are analyzing this as a calculated attempt by terrorist leaders to increase the effects of its initial attack with a “second terror bombing” targeting South Korea. The incident is reminiscent of the 2007 nightmare in Afghanistan in which a group of Koreans were abducted.

The bombing Monday in Shibam, which left four Korean tourists dead, was planned as the first “operation” conducted following the formation of “Al-Qaeda in the Arabian Peninsula,” reported Al Jazeera, a Qatar-based satellite TV channel well-acquainted with the Islamic world. This means that the operation was carried out with special import attached to it by the newly formed Al-Qaeda organization.

The second terrorist attack targeting the government rapid response team and surviving family members of the victims is provoking concerns that it may have been a signal from Al-Qaeda that it is not stopping at isolated terror attacks. The speculation is that even if Al-Qaeda did not initially single Koreans out when carrying out the first attack in Shibam, they may have done so with the second attack after seeing the considerable effects of the first incident in South Korea and internationally.

The 2007 kidnapping of Koreans in Afghanistan did not target Koreans in particular either. But it had a greater impact on international society because people from Northeast Asian countries are not often the victims of terrorist attacks in Middle Eastern countries. Added to this was the fact that South Korea had deployed soldiers to Afghanistan as a country allied to the United States, and the Taliban reaped a greater political effect with the kidnapping of Koreans than with previous kidnappings of Westerners when it was met with the withdrawal of Korean forces. The current incident as well is generating more interest than terrorist attacks on Western tourists.

There is the possibility that Al-Qaeda may be using this incident as part of an effort to express its opposition to the redeployment of South Korean soldiers to Afghanistan, which the United States is calling for, and that it could try to wage a war of international opinion on the expansion of the U.S. troop deployment to Afghanistan. In a recorded message last month, the leader of Al-Qaeda in the Arabian Peninsula, Nasser al-Wahaishi, said that Yemeni President Ali Abdullah Saleh had permitted military operations by a multinational navy, including British and French forces in the Gulf of Aden and the Arabian Sea, in order to suit Western tastes. There is also a possibility that Al-Qaeda will take issue with South Korea’s recent deployment of its Cheonghae Unit to the sea off the coast of Somalia.

There are only 190 or so Koreans living in Yemen, but companies like Samsung, GS Holdings and Hyundai Heavy Industries are present in petroleum and gas development and infrastructure building efforts, providing sufficient room for Al-Qaeda to increase its effects on South Korea.

* Related blog*
http://koreareport2.blogspot.com/2009/03/koreans-become-terrorism-targets-in.html
Posted by NO Base Stories of Korea at 10:11 AM