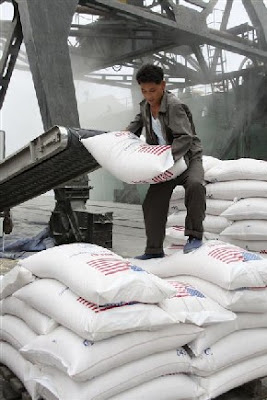 * Image source/ caption*
Same as the original article below

‘In this photo released by the World Food Program, sacks of U.S. wheat are discharged from the MV Baltimore in the port of Nampo, North Korea, on Sunday, June 29, 2008. (AP Photo)’

http://english.hani.co.kr/arti/english_edition/e_northkorea/345002.html
North Korea rejects U.S. food assistance: Refusal of aid could be another way for North to object to South Korea-U.S. military drills or respond to criticism about its satellite launch

North Korea has notified the United States that it does not want to receive any additional U.S. food assistance. The United States has been sending shipments of food to the North since last year, but disagreements over distribution and monitoring have cause interruptions and delays in aid delivery.

In a regular briefing on March 17 (EST), U.S. State Department spokesman Robert Wood said, “North Korea has informed the United States that it does not wish to receive additional U.S. food assistance at this time,” adding that “This was a program intended to try to help get food to needy North Koreans, and we’re obviously disappointed in that.”

The North usually uses the state-run Korean Central News Agency whenever it wants to deliver a strong message, so the fact that the North has used other channels to deliver the message makes this an unofficial notification.

North Korea’s rejection of U.S. food assistance is somewhat unexpected. It does not seem likely that the North would be using the move to pressure the United States, given that it is something that would be used as a bargaining chip for aid providers, not aid recipients.

North Korea has suffered chronic food shortages in the past, so the North’s refusal of aid from the United States has raised questions that neither country has yet been able to answer.

The North may have decided to reject food assistance because of the continued friction between the two sides over how the distribution of food shipments should be monitored. Diplomatic sources in Washington say that the United States has been wanting North Korea to issue entry visas for nine aid workers, in addition to the current three, citing the agreement it has with the North in which there is no limit on the number of aid workers allowed, and that out of the 59 World Food Program aid workers in North Korea, it needs 12 who can speak Korean. The North has rejected the request.

There has also been friction over the pace of food assistance, which may have been another reason for the North’s rejection of aid. The United States agreed to send 500,000 tons of food to North Korea last May, but has only shipped 169,000 tons up to this point. This has raised the possibility that North Korea, seeing the slow pace in aid shipments from the United States, may even have accused the United States of trying to spy on it under the guise of monitoring food distribution.

It is also possible that North Korea made a political decision amid the heightened tensions on the Korean Peninsula, which have flared over the North’s objections to Key Resolve, the joint military drill being conducted March 9-20 by South Korean and U.S. forces, and the North’s plan to launch what it says is a satellite sometime between April 4 and 8.

In a public debate on North Korea held Wednesday, South Korean Unification Minister Hyun In-taek said he viewed North Korea’s rejection of U.S. food aid as a response to Key Resolve and growing criticism from the international community, as well as from South Korea, the United States and Japan, about the North’s announcement that it plans to go ahead with the satellite launch.

Some say the North’s rejection of food assistance could be viewed as a sign that it will take a harder line as relations with the United States and South Korea. Professor Yang Moo-jin of the University of North Korean Studies said the North may be trying to show that it is not going to kowtow to South Korea and the United States because of its food shortage.

However, it remains uncertain whether North Korea can continue to reject U.S. assistance in the future because Pyongyang is so reliant upon outside assistance.


* Related article*
http://english.hani.co.kr/arti/english_edition/e_northkorea/345203.html N. Korea detains two female American journalists The women, one of whom is Korean-American, were filming video near the Chinese-North Korean border along the Tumen River Posted on : Mar.20,2009 09:44 KST
© 2006 The Hankyoreh Media Company
Posted by NO Base Stories of Korea at 10:19 AM