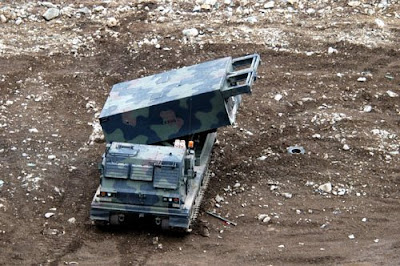 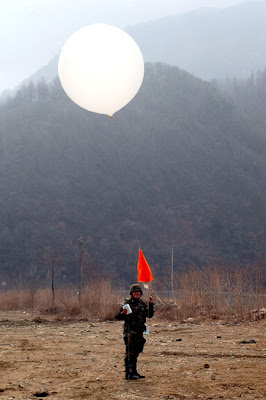 * Image Source/ caption*
Same as the article below

Thousands of U.S. troops, from both on and off the Peninsula, are participating in RSOI and another exercise, Foal Eagle, this month.

On Thursday, they fired the M270A1 for the first time at Rocket Valley, a training area near the Demilitarized Zone.

Each M270A1 launcher can fire up to 12 rockets in quick succession. The main advantage of the newer MLRS is its ability to move into position and fire more quickly than the M270, Daniel said.

“It is a matter of seconds, whereas the older models take two or three times as long,” he said.

Nearby, a tracked MLRS prepared to move along a muddy road in Rocket Valley — a steep tree-filled ravine with a small stream running down the middle.

The Grafenwöhr training area where 1-27 fires the MLRS in Germany has a couple of rolling hills, but it is flat compared to Rocket Valley, Daniel said.

“It doesn’t make a whole lot of difference. It is just a different firing solution,” he added.

Battery A fire direction controller Sgt. Michael Pulbrook, 26, of Los Angeles, relays commands to MLRS crews depending on the type of round required and the type of mission.

The launchers can shoot short-, medium- and long-range missiles. They can suppress enemy air defenses so helicopters can move into an area, do counter fire against enemy artillery units or go after targets of opportunity, he said.

Shortly after he spoke, the MLRS units moved into firing positions in the valley. When the command was given, the rocket tubes pointed skyward at about a 45-degree angle and spun to face their targets at the far end of the mist-shrouded valley. Suddenly three brightly glowing rockets streaked through the sky, leaving smoky white vapor trails in their wake.

The rocket shoot was the culmination of weeks of work for Battery A supply specialist Spc. Joey Correnti, 25, of Red Desert, Wyo., who arrived ahead of the unit and assembled the equipment, vehicles and field rations for more than 80 soldiers.

Correnti said troops in South Korea have a different attitude from GIs in Germany.

“The attitude is different because they have to be ready to go in a minute. We are a go in 72 hours to a week in Germany, but these guys would roll up the hill in an hour and a half and put rockets down range,” he said.
Posted by NO Base Stories of Korea at 3:56 PM