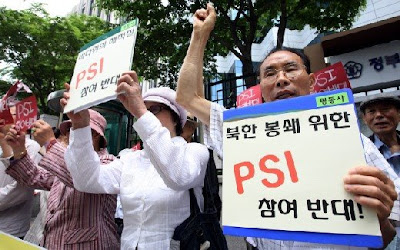 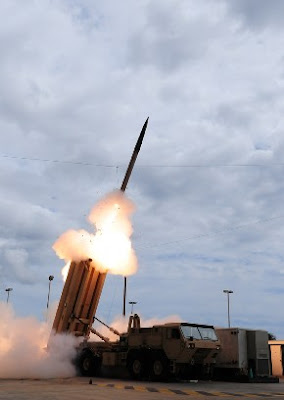 * Image source/ caption*
Same as the original articles below

'Members of Solidarity for Peace And Reunification of Korea hold a press conference to criticize the fact that the government sent delegate to the PSI conference in Washington in front of Foreign Minister in Seoul on March 29 2008.' http://english.hani.co.kr/arti/english_edition/e_northkorea/345206.html

The Terminal High Altitude Area Defense missile, used to intercept an incoming ballistic missile, being launched March 17 during a test at the Pacific Missile Range Facility off the island of Kauai in Hawaii. (Source: U.S. Missile Defense Agency via Bloomberg News)
http://english.hani.co.kr/arti/english_edition/e_northkorea/345208.html

The South Korean government is toying with the idea of increased participation in the Proliferation Security Initiative on weapons of mass destruction, in anticipation of North Korea’s announced “satellite launch” early next month. A core government official said, “Whether it’s a missile or a satellite, the thing North Korea is launching is a weapon of mass destruction,” adding that “because the PSI was formed in the interests of preventing the proliferation of WMDs, a need is arising” to join in efforts for military security.

The South Korean government is toying with the idea of increased participation in the Proliferation Security Initiative on weapons of mass destruction in response to North Korea’s imminent rocket launch. A core government official said, “Whether it’s a missile or a satellite, the thing North Korea is launching is a weapon of mass destruction,” adding that “because the PSI was formed in the interests of preventing the proliferation of WMDs, a need is arising” to join in efforts for military security.

South Korea is currently participating in the PSI in the status of observer, engaging in only five of the PSI’s eight activities. This follows repeated requests in early 2006 from the George W. Bush administration. Since then, in spite of constant calls by the United States for expanded participation, it has held off on the remaining three activities, namely providing material support during interdiction exercises within the region, providing material support for such exercises outside the region, and formally declaring its participation.

Full-on participation in the PSI could easily lead to disaster in inter-Korean relations. If a vessel suspected of carrying WMD-related materials such as nuclear substances enters the territorial waters of a nation formally participating in the PSI, that nation is required to mobilize its military and coast guard, stop the vessel and search it. If this search turns up such materials, the nation takes measures such as confiscation and expulsion.

North Korea is a major target of the PSI, and if it objects to these measures, it could lead to an armed clash between South and North. In an October 2006 research report entitled “North Korea and the Proliferation Security Initiative on Weapons of Mass Destruction,” the Korea Institute for Defense Analyses stated that “North Korea’s response to the PSI will be offensive and omnidirectional.” The report also predicted that there was a strong possibility North Korea would “apply military pressure, for example mobilizing its military might to attempt provocations at the Northern Limit Line, in order to hinder the participation of South Korea.” And on October 27, 2006, while he was serving as First Vice Minister for Foreign Affairs and Trade, current Minister for Foreign Affairs and Trade Yu Myung-hwan said at the National Assembly that “If we carry out the PSI on weapons of mass destruction in the waters around the Korean Peninsula, there is a strong possibility of a military clash in light of the situation of military confrontation, and because of that we are not participating in it.”

Material support during interdiction exercises within and outside the region could also give the appearance of South Korean cooperation in a blockade of North Korea. If multinational military and coast guard vessels congregate to search suspicious vessels in South Korean territorial waters adjacent to those of North Korea or in the surrounding sea area, North Korea could mobilize its naval forces in response. It was for this reason that the Roh Moo-hyun administration drew a clear line when the possibility of full South Korean participation in the PSI was examined as a plan for sanctions against the North immediately after its 2006 nuclear test. “Our policy is to decide the level of our measures related to expanded participation in the PSI under the principle of not taking measures aimed at a maritime blockade of North Korea,” said then Cheong Wa Dae National Security Advisor Song Min-soon at the time.

But changes in this current have been detected since the Lee Myung-bak administration took office. It began in January 2008 when the Ministry of Foreign Affairs and Trade stated in an operational report for the presidential transition team that there was “a need to examine formal participation as a PSI member country.” And Minister of National Defense Lee Sang-hee hinted at an intent to participate fully during a National Assembly inquiry on February 16, saying, “With North Korea developing long-range missiles and nuclear capabilities, the time has come to reexamine participating militarily in the PSI.”

Opposition parties have pointed out the need for circumspect measures in consideration of inter-Korean relations. Lawmaker Moon Hak-jin, a Democratic Party member of the National Assembly’s Foreign Affairs, Trade and Unification Committee, said that there was “a sense that the government is rushing into things.” Moon stated the need to “deal with the situation after giving it deep consideration.”

Democratic Labor Party spokesperson Woo Wi-young criticized what she called the “fire-back tactics” of using the PSI in response to North Korea’s satellite launch, saying that it “doesn’t help the situation of tension on the Korean Peninsula at all.”

And New Progressive Party spokesman Kim Jong-cheol urged the government to withdraw its plans to examine participation in the PSI, saying, “What is needed now is not the PSI but sincere dialogue to relieve the hardening of inter-Korean relations.”

* Related article*
http://english.hani.co.kr/arti/english_edition/e_northkorea/345208.html
North’s satellite launch may prompt South to agree to full participation in the PSI: Government appears to be surveying its capacity to provide the material support full participation would require

Posted by NO Base Stories of Korea at 9:51 PM