The scene is naval base construction workers working on the ground work on the top of the Metboori Hill. The Beom Island underneath which the UNESCO designated soft corals inhibit looks down this terrible scene. 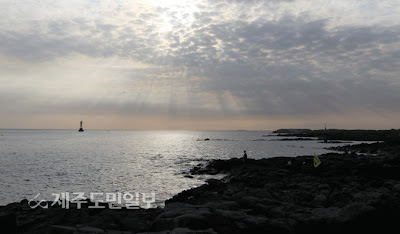 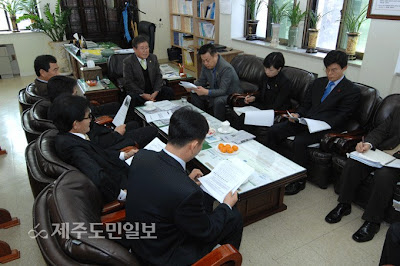 The Jeju Island Government and Island Council that are feverish for the Jeju Island ‘being selected as one of seven wonders of nature are exposing their antinomic behavior of normally driving naval base construction even by annulling the absolute preservation areas of the 1st class scenery view, in the Gangjeong village.

Some parts of the Island people’s society, especially centered on the Gangjeong Village People’s Council, have raised the issue of injustice in the process of passing bill on the annulment of the absolute preservation areas in snatching way by the Island government and Island Council [in 2009], but the newly launched Island government and Island Council since July, 2010 have been consistent in their answers saying that “It is difficult to cancel the annulment disposal on the absolute preservation areas.”

The Island citizens have been emphasizing that the planned naval base is deviated from the identity of the Jeju Island-‘the Island of Peace,’ and ‘the Island of pristine nature.’

The Gangjeong Village People’s Council saying, “The coastal areas of the Gangjeong village have been designated as the absolute preservation areas on Oct. 27, 2004, because of its very scenery beauty,” has stated that ‘according to the Island regulations, the areas are applicable to the 1st class scenery protection zone,´ in Its letters to each of the Island government and Island Council on Jan. 4, 2011.

The Gangjeong Village People’s Council claiming that “The Island governor and Island Council have to cancel the disposal on the absolute preservation areas in the coastal areas of the Gangjeong village, illegally done [by the ex-Island government and ex-Island Council], has appealed that “the nature environment of the coastal areas of the Gangjeong village should be protected by the special law and regulations of the Island.”

However, the Jeju Island government and Island Council, while driving for the Jeju Island being selected as one of the world seven wonders, have not made any proper replies to the questions raised by the Island societies.

The Island government and Council have pushed to inform the public only focusing on the wave effect of ‘being selected as one of the world seven wonders,’ without forming public persuasiveness and shared empathy, despite expectation of tremendous damage on nature view and resource, following the naval base construction.

Related to that, the Island governor, Woo Keun-Min saying that, “The Jeju has met the watershed for tourism industry, with its achievement of the three designations by the UNESCO,” stated that, “If it is selected as one of the seven wonders in the world, it will heighten the brand awareness on the Jeju and there will be chance to manifest its own value blessed by heaven.”

The Island societies have constantly raised their concern and criticism on the ‘unilateral actions’ by the Jeju Island government and Island Council.

Prof. Yoon Yong-Taek, Jeju University(Philosophy) saying that, “Currently the Jeju Island is showing its contradictory position,” pointed out that “how the Island authorities can explain the naval base construction when the world environmental leaders visit the Jeju for the selection of the seven wonders of nature in the world,’ and World Conservation Congress (WCC) in the Jeju Island [from Sept 6 to 15. 2012]?”

Following that, Prof. Yoon saying that, “The naval base would be the obstacle for the development of the Jeju in the long term,” claimed that “If the Jeju wants to be selected as one of the seven wonders and to be an environmental capital in the world, it should give up the naval base.”

Saying that, “to construct a naval base while driving for the Jeju to be selected as one of the seven nature views, is like installing mine in the treasures of the Jeju,” emphasized that, “It is concerned about that the image of the Jeju would be worse with a naval base construction, as well as that it would be national shame.”

The personnel in the civic social organizations saying that, “The Island government and Island Council should arrange the space for discussion for the Island people if they want to persuade them regarding the matters on the necessisity of naval base construction and on the affect on the identity of the Jeju, before they drive for being selected as one of the seven wonders in the world,”
Posted by NO Base Stories of Korea at 12:41 PM