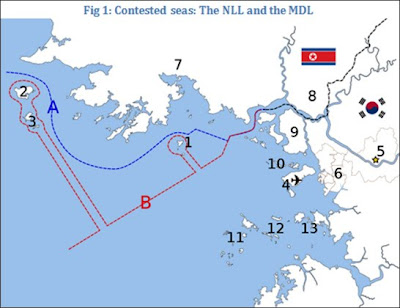 What's happening on the Korean peninsula? If you read the press or listen to the talking heads, your best guess would be that an insane North Korean regime is willing to risk war to manage its own internal political tensions. This conclusion would be hard to avoid because the media rarely provide any historical context or alternative explanations for North Korean actions.

The conventional wisdom is that both attacks were motivated by North Korean elite efforts to smooth the leadership transition underway in their country. The take away: North Korea is an out-of-control country, definitely not to be trusted or engaged in negotiations.

But is that an adequate explanation for these events? Before examining the facts surrounding them, let's introduce a bit of history. Take a look at the map above, which includes both Baengnyeong and Yeonpyeong Islands.
The armistice that ended the Korean War fighting established the Demilitarized Zone (DMZ) which separates North Korea from South Korea. At that time, the U.S. government unilaterally established another dividing line, one intended to create a sea border between the two Koreas. That border is illustrated on the map by line A, the blue Northern Limit Line (NLL).
As you can see, instead of extending the DMZ westward into the sea, the U.S. line runs northward, limiting North Korea's sea access. The line was drawn this way for two reasons: First, when the fighting stopped, South Korean forces were in control of the islands off the North Korean coast and the U.S. wanted to secure their position. Second, control over those islands enhanced the ability of U.S. forces to monitor and maintain military pressure on North Korea.
North Korea never accepted the NLL. It argued for an alternative border, illustrated by line B, the red West Sea Military Demarcation Line (MDL). Acknowledging the reality of Southern forces on the islands off its coast, North Korea sought recognition for a sea border that went around the islands but otherwise divided the sea by extending the DMZ line.

READ MORE
Posted by NO Base Stories of Korea at 3:41 AM