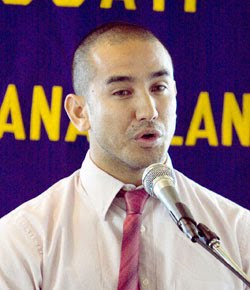 Attorney Leevin Camacho, We Are Guahan member, yesterday disputed Governor Eddie Calvo’s claim that $15 billion is coming to Guam from the military buildup and that the entire buildup may stop because of the disagreement over Pagat.

Camacho made this statement when he addressed members of the Rotary Club of Guam yesterday.

Camacho said he does not know where the $15 billion figure is coming from, because according to documents the Department of Defense has released, the Government of Guam is only set to receive $1.78 billion to be spread out over 10 years, and even that figure has been overstated.

“No one has looked at how much the buildup is going to cost GovGuam,” he said. “In terms of net, the $1.78 billion is an overstatement, it’s generous, and it does not take into account any increasing costs,” said Camacho.

Camacho also stated that according to University of Guam professor and economist Dr. Claret M. Ruane, the $1.78 billion figure from the Department of Defense’s Environmental Impact Statement may be overestimated by 18 to 41 percent because information from Hawaii was used to prepare the figures.

Camacho asked: “If the Governor thinks the money coming for projects inside the fence will go to Guam, of the projects that were awarded how many were given to Guam companies?”

Camacho said We Are Guahan is concerned mostly about the ancient village of Pagat being turned into a series of firing ranges.

But the group is also worried about public education, housing, traffic and health care being negatively affected by the relocation of 8,400 U.S. Marines and their over 9,000 dependants from Okinawa to Guam.

“Are the benefits greater than the cost? I’m not sure,” he said.

Camacho also told Rotary Club of Guam members that Governor Calvo’s statements that the buildup may stop because of the dispute over Pagat “are untrue.”

Camacho said that Pagat has taken centerstage, but in reality most of those projects are not disputed. But he said the military has taken an “all or nothing approach to the buildup.”

Pagat is the only ancient Chamorro village with public access, said Camacho. And it is still being used by indigenous healers and for cultural practices like fishing. All other villages are on DoD property and those without base access are usually unable to visit the sites, said Camacho.

He said that the military has disregarded all other options, including splitting up the series of five firing ranges and keeping them on property DoD currently controls, which is 28.5 percent of the island.

Camacho also said that DoD’s recent claims that they will be firing over Pagat and into the water, thus leaving the area open all the time for people to visit the site does not seem logical, and he can’t imagine anyone wanting to go down there while fifty caliber machine guns are going off.

The lawsuit filed over Pagat by the Guam Preservation Trust, We Are Guahan, and the National Trust for Historic Preservation in Hawaii has a scheduling hearing in the second week of February with a response from the defendants expected by Feb. 14.

Camacho replied saying, "Unless you care about something for the entire time at no point can you realize how important something is and that's incorrect I think it's awesome it's awesome and incredible that people now are looking at cultures being valuable outside of being strictly monetary. People want to learn about Pagat now. That's unfortunate that it's taken DOD's plans to acquire it and build a grenade launcher and machine gun range over it but that doesn't mean that it's any less valid to argue that DOD should stay within it's footprint and leave Pagat alone."

Calvo: Buildup Goals Must Be Good for Guam