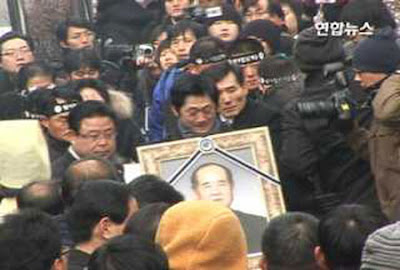 File Photo =
January 20 marks the second anniversary of the "Yongsan tragedy." The funeral service for five victims of Yongsan urban redevelopment project, who were killed during violent clashes with the riot police while resisting forceful eviction operation, was held on Jan 9, 2010, while opposition politicians and civic group leaders were present. It was 355 days after the evictees were killed and during this time their bodies were kept frozen at Namildang Building.
The tenants in the Yongsan area, Seoul, demanded fair compensation for evacuating their rented stores and homes while the negotiation for compensation dragged on amid physical clashed between two sides. Later the Supreme Court ruled that the evictees' violent resistance was illegal, but the families and relatives of the victims contend that the tragedy occurred because the riot police tried to crash ruthlessly the protestors who were demonstrating on a rooftop. The memories of the Yongsan tragedy still lingers around us, with many problems unsolved and scars unhealed. (Photo by Yonhap Caption by Seol Wontai )
__________________________________________________
The Kyunghyang Shinmun
Two Years After the Yongsan Tragedy, Scars Remain Unhealed
Jan. 20, 2011

On January 20, 2009, the rooftop of the Namildang Building in the Seoul district of Yongsan was engulfed in flames. Five evictee protesters, who had climbed a watchtower to avoid being driven from their homes, came down as blackened corpses.

After 355 days, the victims' bodies were taken out of storage and laid to rest. The Namildang Building was demolished, so that nothing now remains to be seen of it. The memories of two years ago, however, which blackened not only the protesters but everybody in Korea, have only grown more vivid. Scars that refuse to heal are making it impossible to consign the Yongsan tragedy to the past.

The Yongsan tragedy is an ongoing one in three respects. First among these is the problem of revealing the truth about what actually happened. The tragedy was essentially one of "murder of citizens by authority," which occurred when police recklessly suppressed a protest by evictees who were losing their homes and being driven out by a redevelopment project.

Though the legal battle regarding the tragedy concluded at the end of last year with a ruling from the Supreme Court, the truth has not been fully revealed. This is because the court only took issue with the illegality of the evictees' resistance of legal redevelopment, disregarding the illegality of excessive suppression by the officials.

The families of the victims, along with the evictees pronounced guilty by the court, are still demanding that the truth be revealed and that those responsible be punished.

After the fire at Yongsan, several measures were taken, but not only were these of doubtful effectiveness, but the fundamental flaw of redevelopment policy---that the weak and poor are legally kicked out---remains just as it was. Since no systemic mechanisms to prevent a recurrence are being prepared, the Yongsan tragedy has been unable to be buried with the past for over two years.

Thirdly, there are the issues of human rights and democracy, which are taking steps backward. Two years ago, the fire at the Namildang Building revealed the naked face of cold-hearted power burning citizens to death.

The legal system did nothing but convict those demanding the human rights and right to live of the evicted as rioters. Far from punishing the man responsible for the Yongsan tragedy, former Seoul police commissioner Kim Seok-ki, the government instead named him Korean consul general in Osaka. Even today, two years after the Yongsan tragedy, we are asking what the government is, and where democracy is going in this country.

The three respects that created the Yongsan tragedy mesh with one another. One cannot investigate the truth and innovate an alternative redevelopment plan separate from one another, and a residence policy that guarantees human rights and the restoration of democracy are never two separate things.

The problem is that ultimately the people must resolve this interlocked dilemma. The second anniversary of the Yongsan tragedy sends the message that the unhealed wounds must be cured with the power of the citizens. (Ed. Jan 20, 2011)
Posted by NO Base Stories of Korea at 10:57 AM