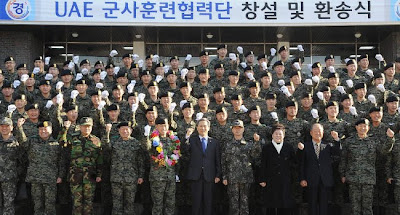 'South Korean Defense Minister Kim Kwan-jin, center in the front row, and combat troops of the Akh Unit cheer for the unit's successful mission in UAE during a farewell ceremony for the unit at the training camp for special warfare in Gwangju, Gyeonggi, on Jan. 10. By Kim Tae-hyeong '

The main contingent of South Korean Akh Special Forces Unit to the United Arab Emirates left for UAE on via chartered plane Jan. 11. The Akh Unit's primary mission is to help train the UAE's Special Forces, conduct joint military drills and protect Korean nationals there in case of emergencies.

The South Korean Army held a farewell ceremony on Jan. 10 for Akh troops at a military training camp for special warfare in Gwangju, Gyeonggi. Some 600 military leaders and troop families, including Kim Kwan-jin, the Minister of National Defense; Gen. Han Min-koo, chairman of Joint Chiefs of Staff; and Gen. Kim Sang-ki, Army chief of staff.

On behalf of South Korean President Lee Myung-bak, Kim delivered encouraging words to the troops of the Akh Unit.

"UAE is not sparing no effort on providing all support for South Korean troops' stationing in local region," Kim said. "I wish you to accomplish mission well so that UAE think their decision to select South Korea troops was right."

The name of the military unit, "Akh," means "brother" in the Arabic language. The name symbolizes friendship between the forces of the two countries.

After the National Assembly approved a plan to dispatch South Korean Special Forces to the Middle East country on Dec. 8 last year, the combat troops completed a four-week training course in which they were informed of the local situation and practiced anti-terror special operations with commandos employing martial arts techniques.

"Under a slogan 'The world's best special forces, fulfill mission in unity,' troops' morale is on the highest ever after going through basic training course," said Lt. Col. Choi Han-o, the commander of the Akh Unit. "The unit will show excellency of South Korean special forces and elevate national status by accomplishing mission in perfect manner."
Posted by NO Base Stories of Korea at 7:00 AM