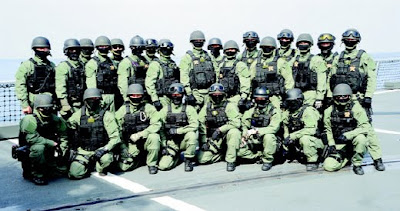 The Navy released this photo to media on Jan. 24 after the elite special naval troops UDT/SEAL succeeded in the rescue operation of 21 crewmembers of a cargo ship Samho Jewelry hijacked by Somali pirates.
The Navy said at the time that the photo was taken on around Jan. 21 or 22, shortly after the successful rescue operation, on the deck of destroyer Choi Young. The Navy also said that there were missing wounded soldiers and soldiers guarding arrested pirates in the photo.

The photo, however, was found to have been taken on Dec. 10, 2010 when the troops engaged in their combat training session.

The Hankyoreh posted the photo without the pictured time and asked for confirmation from the military’s, after discovering the picture was taken in December according to the digital file information.

In response, the military said it was a simple mistake resulting from the lack of internal confirmation.

(Lee Jong-keun and Kwon Hyuk-chul)
Posted by NO Base Stories of Korea at 12:02 AM