Text Fwd: Is There No Problem with Excessive Excitement over the Successful Operation to Neutralize the Somali Pirates? 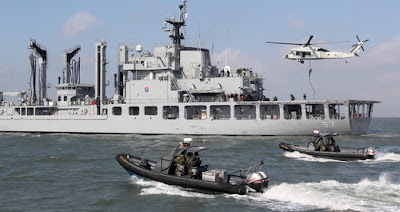 Kyunghyang Shinmun
Is There No Problem with Excessive Excitement over the Successful Operation to Neutralize the Somali Pirates?
Posted on : 2011-01-24 12:58

Since the successful operation to rescue the sailors of the Samho Jewelry, the government and media have reported and publicized the event extensively.

Following President Lee Myung-bak's statement to the nation, where he said that he had ordered the rescue operation, broadcasters have devoted most of their news time to the story on a daily basis, while running special reports on the success of the operation.

That the sailors were rescued from the clutches of the pirates is something about which we, along with the rest of the nation, are of course glad. And we naturally congratulate the soldiers who risked their lives in the crackdown operation. We believe, however, that excessive reporting and publicity of the operation's success has several dangerous implications.

First of all, too much publicity may increase confidence in the use of military solutions, thereby narrowing the scope of choice and action when responding to similar events in future.

This success may prompt the rise of an adventurist way of thinking that holds that any situation can be resolved by military means. There is also a possibility that excessive praise for the operation may create an understanding that the problems with our military's capacity to maintain national security, which were revealed by the Cheonan and Yeonpyeong Island incidents, have to a considerable extent been solved.

The damage sustained by Korea during this operation is considerable. In the unsuccessful primary operation, three soldiers were injured. In the secondary operation, the captain of the chemical freighter the Samho Jewelry sustained a bullet wound from a pirate in his abdomen and is now in a serious condition.

Nonetheless, broadcasters continue to focus on singing the praises of a bold and elaborate operation, without addressing the dangers of a military operation in a balanced way.

Furthermore, they are introducing the weapon systems and circumstances of the operation as if the whole thing were a scene from a film. Some are pointing out that this exposure of weapon systems and operational concepts has made subsequent operations more difficult.

Such extensive publicity and reporting are enough to give rise to suspicions that they hide a different background. In other words, the Lee Myung-bak government sees this as a golden opportunity to restore its image, which was damaged by the Cheonan and Yeonpyeong Island shelling incidents, and has set out to publicize it more than necessary.

Solid national security and protecting the lives of the people is something that can never be achieved through publicity or rhetoric. An EU navy spokesman said, "the Korean navy rescued the sailors safely through its commando operation, but such an operation can place sailors in even greater danger and we will therefore not be carrying out a similar one."

This means not that the EU lacks operational capability, but that damage to human life during an operation brings greater political burdens. Another Korean ship, the FV Golden Wave, has still not been released since its capture by Somali pirates.

See also
Korea Times
Jan. 24, 2011
Korea willing to swap pirates with hostages
Posted by NO Base Stories of Korea at 4:51 PM