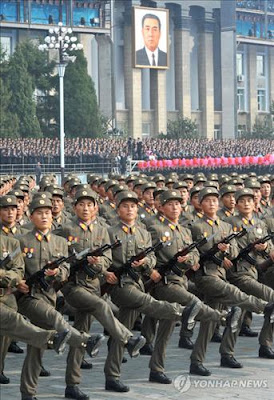 Parading North Korean troops during a ceremony marking the 65th anniversary of the founding of the country's ruling Workers' Party in October last year. The large portrait hanging on a building in the background is the country's late founding president, Kim Il-Sung.(Yonhap) 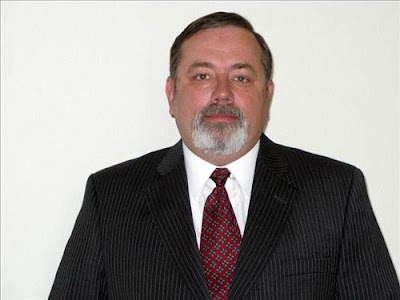 Joseph Bermudez, possibly one of the world's top non-Korean experts on North Korea's military. Although North Korea's 1.2-million-strong military is ill-fed, ill-equipped, its troops are amazingly well disciplined, he says.
________________________________
Yonhap News
2011/01/17 09:00 KST
(Yonhap Feature) N. Korean Army watcher in Colorado expects busy 2011
By Andrew Salmon
Contributing Writer
SEOUL, Jan. 17 (Yonhap) -- Such is the Korean Peninsula's global profile that there are overseas experts on all aspects of Korea, from politics to literature, from martial arts to cuisine.

In the mountains of the U.S. state of Colorado, one man has carved a particularly arcane niche: Joseph Bermudez, 56, is possibly the world's top non-Korean expert on the North Korean People's Army, or KPA, which ranks as the world's fifth largest with 1.1 million soldiers.

An analyst for prestigious defense publisher Janes, founder of the KPA Journal and author of books on North Korean special forces and ballistic missiles, Bermudez is a consultant for government agencies in the United States and worldwide on Kim Jong-il's military machine.

So how did a native of middle America become a specialist on the KPA?

"I always had an interest in military history and became friends with a group of people who were military history enthusiasts,”Bermudez said in a telephone interview. "One day, one of those friends who was in government called up and said, 'A major who is being sent to Korea needs some help with a project.'"

As a defense analyst, Bermudez's early specialization was the Middle East and ballistic missiles; the suggested project was an overview of the KPA. However, he was able to assist the major, and he has never looked back.

"Anyone who does anything for more than 25 years gets quite good at it, I assume," he said, adding that he now has a wealth of sources on tap.

"I read everything publicly available and have amassed a large collection of declassified intelligence documents," he said. "I have had an even greater opportunity to meet with officials from around the world concerning the subject and have spoken to North Korean defectors."
[..]

Currently, he is working on histories of North Korean intelligence operations and of the KPA in the Korean War, while updating his work on KPA special forces. He expects to be in Korea in 2011.

"I come to South Korea about once a year," he said. "But I haven't been to the North. I've heard they don't appreciate me much."
Posted by NO Base Stories of Korea at 7:13 AM