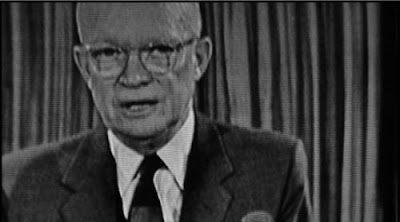 
Fifty years after Dwight D. Eisenhower's January 17, 1961 speech on the "military-industrial complex", that threat has morphed into a far more powerful and sinister force than Eisenhower could have imagined. It has become a "Permanent War State", with the power to keep the United States at war continuously for the indefinite future.

But despite their seeming invulnerability, the vested interests behind U.S. militarism have been seriously shaken twice in the past four decades by some combination of public revulsion against a major war, opposition to high military spending, serious concern about the budget deficit and a change in perception of the external threat. Today, the Permanent War State faces the first three of those dangers to its power simultaneously -- and in a larger context of the worst economic crisis since the great depression.

When Eisenhower warned in this farewell address of the "potential" for the "disastrous rise of misplaced power", he was referring to the danger that militarist interests would gain control over the country's national security policy. The only reason it didn't happen on Ike's watch is that he stood up to the military and its allies.

The Air Force and the Army were so unhappy with his "New Look" military policy that they each waged political campaigns against it. The Army demanded that Ike reverse his budget cuts and beef up conventional forces. The Air Force twice fabricated intelligence to support its claim that the Soviet Union was rapidly overtaking the United States in strategic striking power -- first in bombers, later in ballistic missiles.

But Ike defied both services, reducing Army manpower by 44 percent from its 1953 level and refusing to order a crash program for bombers or for missiles. He also rejected military recommendations for war in Indochina, bombing attacks on China and an ultimatum to the Soviet Union.

After Eisenhower, it became clear that the alliance of militarist interests included not only the military services and their industrial clients but civilian officials in the Pentagon, the CIA's Directorate of Operations, top officials at the State Department and the White House national security adviser. During the Kennedy and Johnson administrations, that militarist alliance succeeded in pushing the White House into a war in Vietnam, despite the reluctance of both presidents, as documented in my book Perils of Dominance .

But just when the power of the militarist alliance seemed unstoppable in the late 1960s, the public turned decisively against the Vietnam War, and a long period of public pressure to reduce military spending began. As a result, military manpower was reduced to below even the Eisenhower era levels.

For more than a decade the alliance of militarist interests was effectively constrained from advocating a more aggressive military posture.


Even during the Reagan era, after a temporary surge in military spending, popular fear of Soviet Union melted away in response to the rise of Gorbachev, just as the burgeoning federal budget deficit was becoming yet another threat to militarist bloc. As it became clear that the Cold War was drawing to a close, the militarist interests faced the likely loss of much of their power and resources.


But in mid-1990 they got an unexpected break when Saddam Hussein occupied Kuwait. George H. W. Bush - a key figure in the militarist complex as former CIA Director -- seized the opportunity to launch a war that would end the "Vietnam syndrome". The Bush administration turned a popular clear-cut military victory in the 1991 Gulf War into a rationale for further use of military force in the Middle East. Secretary of Defense Dick Cheney's 1992 military strategy for the next decade said, "We must be prepared to act decisively in the Middle East/Persian Gulf region as we did in Operations Desert Shield and Desert Storm if our vital interests are threatened anew."


The Bush administration pressured the Saudis and other Arab regimes in the Gulf to allow longer-term bases for the U.S. Air Force, and over the next eight years, U.S. planes flew an annual average of 8,000 sorties in the "no fly zones" the United States had declared over most of Iraq, drawing frequent anti-aircraft fire.


The United States was already in a de facto state of war with Iraq well before George W. Bush's presidency.


The 9/11 attacks were the biggest single boon to the militarist alliance. The Bush administration exploited the climate of fear to railroad the country into a war of aggression against Iraq. The underlying strategy, approved by the military leadership after 9/11, was to use Iraq as a base from which to wage a campaign of regime change in a long list of countries.


That fateful decision only spurred recruitment and greater activism by al Qaeda and other jihadist groups, which expanded into Iraq and other countries.


Instead of reversing the ill-considered use of military force, however, the same coalition of officials pushed for an even more militarized approach to jihadism. Over the next few years, it gained unprecedented power over resources and policy at home and further extended its reach abroad:


The Special Operations Forces, which operate in almost complete secrecy, obtained extraordinary authority to track down and kill or capture al Qaeda suspects not only in Iraq and Afghanistan, but in many more countries.


The CIA sought and obtained virtually unlimited freedom to carry out drone strikes in secrecy and without any meaningful oversight by Congress.


The Pentagon embraced the idea of the "long war" - a twenty-year strategy envisioning deployment of U.S. troops in dozens of countries, and the Army adopted the idea of "the era of persistent warfare" as its rationale for more budgetary resources.


The military budget doubled from 1998 to 2008 in the biggest explosion of military spending since the early 1950s - and now accounts for 56 percent of discretionary federal spending.
The military leadership used its political clout to ensure that U.S. forces would continue to fight in Afghanistan indefinitely, even after the premises of its strategy were shown to have been false.


Those moves have completed the process of creating a "Permanent War State" -- a set of institutions with the authority to wage largely secret wars across a vast expanse of the globe for the indefinite future.


But the power of this new state formation is still subject to the same political dynamics that have threatened militarist interests twice before: popular antipathy to a major war, broad demands for reduced military spending and the necessity to reduce the Federal budget deficit and debt.


The percentage of Americans who believe the war in Afghanistan is not worth fighting has now reached 60 percent for the first time. And as the crisis over the federal debt reaches it climax, the swollen defense budget should bear the brunt of deep budget cuts.


As early as 2005, a Pew Research Center survey found that, when respondents were given the opportunity to express a preference for budget cuts by major accounts, they opted to reduce military spending by 31 percent. In another survey by the Pew Center a year ago, 76 percent of respondents, frustrated by the continued failure of the U.S. economy, wanted the United States to put top priority in its domestic problems.


The only thing missing from this picture is a grassroots political movement organized specifically to demand an end to the Permanent War State. Such a movement could establish firm legal restraints on the institutions that threaten American Democratic institutions through a massive educational and lobbying effort. This is the right historical moment to harness the latent anti-militarist sentiment in the country to a conscious strategy for political change.


Gareth Porter is an investigative historian and journalist on U.S. national security policy who has been independent since a brief period of university teaching in the 1980s. Dr. Porter is the author of four books, the latest of which is Perils of Dominance: Imbalance of Power and the Road to War in Vietnam (University of California Press, 2005). He has written regularly for Inter Press Service on U.S. policy toward Iraq and Iran since 2005.
Posted by NO Base Stories of Korea at 6:29 AM