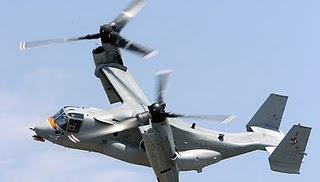 Peace Philosophy Center
V-22 Osprey "extremely noisy with a horrific racket"
Jan. 27, 2011
Okinawan newspapers on January 27 reported that the residents of Brewton, Alabama complained about the noise caused by the V-22 Osprey used in the US Air Force training mission at their municipal airport, and the Air Force offered apology and told the local airport authority that the squadron will not come back. “Those aircraft are extremely noisy with an horrific racket," the airport director is quoted in the local news (see below).
It is disturbing news for Okinawa, as USMC is planning to deploy Ospreys in Henoko and Takae, two places in Northern Okinawa where military expansion is planned despite the opposition from local residents. Okinawans are worried, not just about their noise, but about the reported risk of accidents by Ospreys. A recent Pentagon report (below) also indicated the continuing unreliability of the aircraft due to "cracking or prematurely failing hinges and access doors, engine and drive components within the nacelle structure, flight control system failures, wiring and swashplate actuators." The aircraft killed thirty people during the course of development, and killed four in a crash in Afghanistan in April 2010.
In late December, a US helicopter hovered over and damaged the protesters' tent in Takae, where US/Japan are planning to build six new helipads (Osprey-capable) surrounding a residential area, but the authorities have not even confirmed that it was a US Marine helicopter that did it. It is unacceptable that a plan to use noisy and dangerous aircraft like V-22 Osprey is not properly disclosed to local residents and there has been no assessment of risks associated with Ospreys in the environmental assessments on both places.
READ MORE
Posted by NO Base Stories of Korea at 7:48 PM