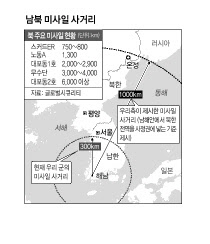 South Korea and the United States reportedly began discussions in late 2010 toward amending the ROK-U.S. missile guidelines, which restrict the firing range of South Korean ballistic missiles to 300 km. The goal of the discussions is to further loosen the restriction on the firing range following the revisions agreed upon in the new missile guidelines of Jan. 2001, in which the limit for independently developed missiles was extended from a 180 km firing range to a 300 km range and a weight of up to 500 kilograms.

“Following the Cheonan sinking and the artillery attack on Yeonpyeong Island last year, South Korea and the U.S. agreed significantly on the issue of extending the ballistic missile firing range,” a government source said Wednesday.

The argument is that while North Korea has the capability to launch a direct strike on the Korean Peninsula and surrounding countries such as Japan since fielding mid-range ballistic missiles with a firing range of 3,000 km in 2007, North Korea is not within South Korea’s firing zone in times of emergency because the range of its ballistic missiles is only 180 to 300 km.

The source added, “Since the discussions between the two countries have just begun, there is no way of knowing how much the firing range and warhead weight will be increased, but they will need to increase the firing range to over 1,000 km.”

Whenever North Korea has held test launches of mid- and long-range missiles in the past, the argument has been vociferously made in South Korea, principally by conservatives and the Ministry of Defense, that South Korea also needs to extend the firing range of its ballistic missiles.

However, in light of the fact that the United States is applying heavy pressure on North Korea to freeze its missile activity and the possibility of Chinese objections to the increase in firing range, some experts are predicting that the scale of the firing range adjustment will not be as large as South Korea hopes.

Of the proposed amendment, Democratic Party lawmaker and former Foreign Minister Song Min-soon said, “If the weight of the ballistic missile warhead exceeds 500 kg, neighboring countries will see it as the installation of a nuclear warhead.”

“It is a matter that needs to be considered carefully in terms of an arms race not only between North Korea and South Korea, but involving all of Northeast Asia,” Song added.

Song also said, “If the ballistic missile firing range is 1,000 km, that puts Tokyo and Beijing within range, and ultimately we ourselves are exposed to that kind of threat.”